Kephallonia is a Greek island located in the west of the Korinthian Gulf, famed as the home region of Odysseus,[1] the titular protagonist of Homer's epic Odyssey.[2] Together with Ithaka, Kephallonia formed the Kephallonia Islands.

Once a wealthy island, its timber-based economy had substantially declined by the time of the Peloponnesian War. In that conflict, it could not escape the chaos that came to engulf it. In the 5th century BCE, it was sparsely populated and was known for its diverse landscape, which included the peaks of Mount Ainos and the sands of Myrtos Beach.

Sometime in the mid-440s BCE, a young Kassandra washed up on the shore of Kephallonia after fleeing from Sparta. She was discovered by Markos, who took her in[3] and raised her into the legendary misthios she would become. Over the years, Kassandra performed numerous errands for Markos, while befriending a number of people including Phoibe, whom she developed a close friendship with. At the same time, Kassandra came into conflict with the Cyclops of Kephallonia, a thug who racketeered much of the local population.[1]

In time, she settled to live within the Ancient Ruins of Kranioi alongside with Phoibe[4] When the Peloponnesian War broke out in 431 BCE, Kephallonian merchants were hired to create and forge gear for the Athenian army.[5][6]

After eliminating the Cyclops at his hideout in Kleptous Bay, Kassandra left Kephallonia alongside Barnabas and the Adrestia[3] to fulfil the assassination contract given to her by Elpenor.[7]

The island was made up of five regions: 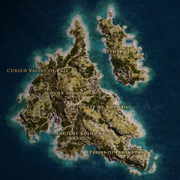