"I'm telling you, Bayek, I am so close to my dream. If only I was given the chance, I know I could become champion. I mean, wealth, luxury, fame! What more could a woman want?"
―Kensa, on her life as a gladiator, 48 BCE.[src]-[m]

Kensa (born c. 85 BCE) was an Egyptian gladiator and a friend of the Medjay Bayek during the reign of Ptolemy XIII.

During her childhood, Kensa befriended Bayek and taught him the ways of her tribe, hunting and trapping. Eventually Kensa's tribe had to move on. Several years later in 70 BCE, Kensa met up with Bayek, Aya, and the street urchin Tuta in Thebes while Bayek was searching for his missing father, Sabu. They learned that Menna, a grave robber who had attacked Bayek's home years earlier, was also in Thebes. With Seri and Neka, two of Kensa's family, the quartet hunted for Menna.[1]

Neka was captured and tortured, but ultimately rescued by the others. During the battle Menna fled on a chariot, with Bayek and Kensa pursuing. Kensa shot Menna's driver dead, and Menna perished in the subsequent crash.[1]

Kensa got word that Sabu was being held in a pit on the island of Elephantine; she joined Bayek and Aya in their search for Sabu. Under the cover of a sandstorm the group infiltrated the island, but instead of Sabu, they found a deranged man in the pit. After they escaped the guards, Sabu revealed himself to the group. Bion, the man hunting the last of the Medjay, arrived at the same trap and was injured, but escaped.[1]

During the Ptolemy XIII's visit to Siwa in 49 BCE, Kensa was taken as a slave and exploited by Lucius Septimius and his clan. She eventually managed to escape and fled the village, making her way to the city of Krokodilopolis in the Faiyum Oasis. There, she was taken in by Felix Martialis, the owner of the Krokodilopolis Arena, who trained her to become a gladiator.[2]

A year later in 48 BCE, Kensa was reunited with Bayek, who had come to the city pursuing Shadya's killer and the Order of the Ancients member The Crocodile. Catching up with Bayek, Kensa helped him gain access to the arena, where they formed a team alternately called The Guardians of Siwa[2] or The Siwan Warriors[3]. Together, Kensa and Bayek fought and climbed the ranks to challenge the arena champions, the Gallic brothers Diovicos and Viridovix. After defeating them, Kensa learned of Bayek's true motives for entering the arena; Bayek believed them to be responsible for Shadya's death. Kensa offered to help him, though Bayek refused and left the arena.[2]

The next day, Kensa was employed as a bodyguard by Berenike, Shadya's true killer and a member of the Order of the Ancients, though in this task Kensa ultimately failed.[2]

Kensa offered her help to Bayek in his revenge against the Order, however was rejected as Bayek did not trust her mercenary-like nature. Kensa therefore remained a freelance bodyguard and gladiator. In time, Bayek revised his judgment of her and invited Kensa to join the Hidden Ones, an offer which she accepted.[4][5]

While it is not required in order to complete the mission, Kensa may be killed during the assassination of Berenike; regardless, Kensa is not mentioned again. Even if Bayek killed Kensa, a papyrus informing that Kensa was still a gladiator in Faiyum can be found in the Bureau of the Hidden Ones, indicating that she survived the encounter. 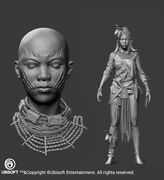 Kensa as she appears in Rebellion

Kensa and Bayek victorious in the arena

Kensa begging Bayek to trust her