Assassin's Creed Wiki
Register
Don't have an account?
Sign In
Advertisement
in: Articles in need of sources, Iroquois, Kanien'kehá:ka, Indigenous peoples of the Americas

The Kanien'kehá:ka (English: People of the Flint), also known as the Mohawk, are one of the five original nations that make up the Haudenosaunee, or Iroquois Confederacy.

Originally from the area that would later become upstate New York and Quebec, the nation is known as the "elder brothers" and "keepers of the eastern door [of the longhouse]" to the other nations of the confederacy.

Due to their overwhelming support of the British Army during French and Indian and the American Revolutionary Wars, they were often subjected to slander, and were nicknamed "Mohawk". This insult originated from the Algonquian language, which means "flesh-eater". [citation needed]

During the 18th century, the Kanien'kehá:ka village of Kanatahséton was situated by a lakeside in the Diamond Basin region of the Frontier.

At least one of their members, Ratonhnhaké:ton, joined the Assassin Brotherhood. His mother, Kaniehtí:io, brought him up alone, until she died underneath burning rubble when he was four years old. Also, one of Ratonhnhaké:ton's childhood friends was Kanen'tó:kon, with which their bond remained together into later life. Meanwhile, Oiá:ner was the Clan Mother of the Kanien'kehá:ka village of Kanatahséton, and showed Ratonhnhaké:ton the Crystal Ball where he learned of his destiny with the Assassins.

At an undisclosed time, Atasá:ta was born into the Kanien'kehá:ka, but was trained separately by his Assassin father. After a Templar raid killed his father, Atasá:ta sought revenge and roamed the cities searching for on those responsible.[1] In 2012, his genetic memories were used by the entertainment branch of the Templar front-company Abstergo Industries as the basis for the tertiary stage Animi Avatar known as the "Silent Shadow", in order to influence the general public via the Animus games console.[2]

In 876 CE, Gorm Kjotvesson, the Maegester of the Wardens of War sect the Order of the Ancients, led an expedition in search of the Isu, taking the crystal ball from the Mohawk in Karonhiakèn:iate'.[3] After Eivor Varinsdottir killed Gorm outside the Grand Temple[4], she returned to Karonhiakèn:iate, where Karonhiaktátie' invited them to recite a Norse story to the tribe. Before departing, Eivor returned the crystal ball to Konwahawíhshon, the leader of the tribe.[5]

During the American Revolutionary War, due to unresolved conflicts with settlers encroaching into the Mohawk Valley, and outstanding treaty obligations to the British Crown, the Mohawk fought against the Continental Army. However, Ratonhnhaké:ton's village remained neutral to the fighting, as they were ordered by the First Civilization member Juno to protect the Grand Temple.[6]

While no official reason was given for why the Kanien'kehá:ka speak English throughout all episodes of The Tyranny of King Washington, it was suggested in a 2013 Q&A session on Raptr that the developers felt the Kanien'kéha language took too long to translate and present on screen, and that the primary game had already presented the language in an authentic manner, so it was unnecessary for them to do it again.[7] 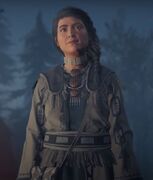 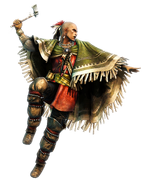