"I see you still have many questions. Who were we? What became of us? What do we desire of you? You will have your answers. Only listen, and I will tell you how."
―Jupiter to Desmond Miles, in the Synch Nexus, 2011.[src]-[m]

Jupiter was an Isu scientist, Father of Understanding, and member of the Capitoline Triad. Alongside the Sacred Voice Minerva and the Mother of Wisdom Juno, he took charge of the gathering and testing of information within the Grand Temple, in order to circumvent the Great Catastrophe.

In 2012, through the Synch Nexus, Jupiter spoke with at least one descendant of both Isu and humans, Desmond Miles.

Jupiter was known by many names both throughout and after his lifetime due to his long life and legacy as a god to humanity. His earliest known name was Tinia,[4] but with the evolution of human religion, a number of distinct and sometimes contemporaneous appellations arose. To the ancient Romans, he was known as Jupiter, the Roman King of the Gods, and was known as Zeus, the "golden child atop Mount Olympos", to the ancient Greeks.[5] In Norse mythology, Jupiter was known as Suttungr, the king of Jötunheimr.[6]

During the Isu Era, Jupiter was considered the "golden child" amongst his siblings and resided on Mount Olympos. He shared a hostile relationship with his older brothers Hades and Poseidon, who ruled the realms of the Underworld and Atlantis, respectively.[5]

According to one Atlantean myth, a matter which led Jupiter to personally visit Atlantis and reprimand Poseidon enraged the Trident King so much that he destroyed the very cycle in which the meeting had occurred and any further mentions of his sibling was considered taboo.[5]

Isolation in the Grand Temple

Upon the outbreak of the Human-Isu War, Jupiter was one who chose to find a means of preventing the coming disaster.[7]

On the construction of Temples to research methods of doing so, Jupiter, Minerva and Juno were given the responsibility of sorting and sampling the possible solutions that would prevent the disaster. The three convened in the Grand Temple, where all the findings from the lesser Temples were gathered, in order to select and test them.[7]

However, though they found each succeeding method to be more promising, each one of the methods failed. At some point, Aletheia spoke with Jupiter, Juno and Minerva, who were working on a seventh method to ensure the survival of the Isu. Yet by that point, Jupiter and Minerva had their concerns about it, as this method involved uploading Isu DNA into a human host, similar to the fifth method.[8] Minerva worried that this would pollute the human genome, and thus the seventh method was ultimately abandoned.[9]

Shortly thereafter, an Isu named Ægir lost a bet and sent a cauldron to Jupiter, but it got lost along the way. Much to Jupiter’s relief, the cauldron was recovered by the Norse Isu, Odin, as a peace treaty between the two factions of Greco-Roman and Asgardian Isu.[10] Delighted, Jupiter decided to hold a feast in celebration of the peace, and agreed to Odin’s suggestion to invite Minerva, his daughter. However, at some point during the feast, Aletheia’s lover, Loki, warned Jupiter of Odin’s true intentions: to steal the seventh method for himself. Angered by this deception, Jupiter confronted Odin at the entrance of the Grand Temple and the two Isu fought in a duel. Odin ultimately won, and made his leave, but not before Jupiter warned him that he would ultimately still fail.[9] After learning that Juno aided Odin in his scheme, Jupiter and Minerva stripped Juno of her title as “Mother of Wisdom” for her crimes.[8]

Some time later, the First Disaster fell upon them, burning the Earth and wiping out nearly all members of the First Civilization.[7] Jupiter stood up as one of the survivors alongside Minerva. Together, knowing that their end was near, they helped humanity rebuild their civilization, constructed a device to prevent another cataclysm from occurring millennia later and used the calculations to try and find the means to make future humans capable of finding it. Like what happened to all the remaining Isu, Jupiter eventually died and the makings of his life were passed down to myth.[11]

In 1499, Minerva mentioned Jupiter in her warning to Desmond Miles, who she addressed through the Prophet, Ezio Auditore.[12]

"Take my words. Pass them from your head into your hands. That is how you will open the way."
―Jupiter to Desmond.[src]

In the year 2012, Jupiter spoke with Desmond, whom he referred to as "the Cipher", in the nexus of time. There, he told him of the Temples and of the First Disaster. In order to prevent the Second Disaster, Jupiter urged Desmond to seek out the Grand Temple and told him the means of opening the way.[7]

Jupiter did not appear when Desmond entered the Grand Temple as the Second Disaster approached, as the Cipher conversed mostly with Juno. Jupiter's image was used by Juno when showing Desmond holographic projections of the Triad's proposed solutions to the First Disaster. Later, Minerva appeared and revealed that she and Jupiter imprisoned Juno and allowed the First Disaster to occur rather than allow her to enslave the Earth. Minerva also revealed that she and Jupiter (or Tinia, as she called him) spent many centuries following the First Disaster walking among humans trying to rekindle the spark of civilization.[11]

In time, Jupiter, like many of his fellow Isu, was upheld by humanity as a god. In Greek mythology, he was known as Zeus, born as the youngest son of the Titan Kronos and his wife Rhea. In fear of a prophecy foretelling his overthrow by his child, Kronos devoured all of his children, save for Zeus, who was hidden by Rhea.[13]

In time, Zeus fulfilled the prophecy and cast Kronos out, creating a new world order with his siblings and other gods, settling on Mount Olympus with eleven other mightiest deities.[14]

Zeus is infamous for his various relationships with multiple individuals, divine and mortal alike. Via these unions, Zeus is considered to have fathered multiple heroes of Greek mythology, including Herakles, Perseus[15] and Polydeukes[16] as well as Greek deities, including Persephone, Dionysos, Charites, Ares, Eris, Hebe, Hephaistos, Pan, Apollo and Artemis.[17]

According to one story, Zeus united the 'Great Twins', Castor and Pollux, in immortality by turning them into the constellation Gemini, via which they later came to signify the astrological sign Gemini.[18]

In the myths Hephaistos was credited also as the acting midwife for Zeus when it had come the time for Athena to be born. With a labrys, Hephaistos cleaved Zeus' head open to free the goddess.[19]

Zeus' main emblem was lightning bolt, and in the 5th century BCE, a stylized version of it graced the banner of Elis as well as the drachmae. The god was also associated with the eagle, often standing for the god himself, or perched near him.[17]

During the 5th century BCE, multiple locations related to the stories told of Zeus' life were named after him throughout the Peloponnese and the Aegean Sea.[17]

Several statues of him also graced locations like Mount Ainos on the island of Kephallonia, though most notable among them was the statue made by the Athenian sculptor Phidias in Temple of Zeus within the Sanctuary of Olympia in Elis. The Spartan misthios Kassandra visited a number of them over the course of her journeys.[17]

In Assassin's Creed II, a statuette of Jupiter is among those that can be collected in Monteriggioni. It is paired with a statue of Minerva. The pair's description read "Here sits the king of all Olympus and beside him stands wisdom, to guide his rule." The statuette of Jupiter is based on Jupiter of Smyrna, also called Zeus de Smyrne.

Jupiter's helmet resembles an eagle, his animal motif in Greco-Roman tradition and a common symbol of the Assassins.

Jupiter is briefly seen in the holographic projections inside the Grand Temple, which is shown to Desmond by Juno upon describing the six solutions that the Isu had worked on.

Tinia is one part of the Capitoline Triad that ruled over the Roman gods. The triad consisted of Tinia (Jupiter), Uni (Juno) and Merva/Mera (Minerva). 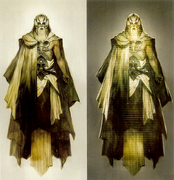 Jupiter as seen within the Synch Nexus

Jupiter with Juno and Minerva

Jupiter with Desmond in the Synch Nexus

A projection of Jupiter seen in the Grand Temple

The statuettes of Jupiter and Minerva in Monteriggioni

Statue of Zeus within the Sanctuary of Olympia in Elis 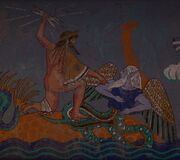 The statue of Zeus on Mount Ainos, Kephallonia

The emblem of Elis: the stylized lightning bolt of Zeus

Zeus (center) amongst the Greek pantheon