An experienced privateer and mercenary, du Casse was introduced to the Order by Laureano de Torres y Ayala. Quickly proving himself to be an asset, du Casse functioned as Torres' hitman, as well as the Caribbean Templars' main supplier of weaponry and ammunition.

Du Casse was born in Montpellier, France in 1682. Joining his uncle, Jean-Baptiste du Casse, Julien took to sea at a young age and fought in the War of the Spanish Succession. During the war, he became disgusted at the French and Spanish monarchy for choosing reputation and bloodlines over talent and skill, but nonetheless continued to serve his country.

In 1704, du Casse deserted from the French Navy during the Battle of Vélez-Málaga and, seeking fortune, traveled to the New World. Initially, he found work in Africa as a slave trader, but found himself lacking the cruelty and detachment to continue partaking in said industry. After a year, he departed for the West Indies, in search of another vocation.

Du Casse spent his next ten years in the West Indies as a mercenary, working for anyone that was willing to pay him. In this way, he eventually came into contact with the Governor of Cuba, Laureano de Torres y Ayala, in whom he found a friend and confidant.

"Convened at last. And in such continental company... England, France, Spain... Citizens of sad and corrupt empires. But you are Templars now. The secret and true legislators of the world."
―Torres to du Casse, Rogers and Kenway 1715.[src]

In July 1715, du Casse, Woodes Rogers and Duncan Walpole had arranged a meeting with Torres, to be inducted into the Templar Order. Staying at the governor's residence in Havana, du Casse and Rogers found themselves waiting longer than expected, as the man they believed to be Duncan Walpole arrived a week late. In actuality, the man that joined them was a pirate named Edward Kenway who had assumed his identity in order to claim Duncan's promised reward.

Following the introductions, du Casse, Rogers and Kenway passed the time with a shooting session, as Torres was not yet ready to meet with them. After Kenway beat Rogers' shooting challenge, du Casse noted the absence of "Duncan's" Hidden Blades, which Kenway explained to be due to his previous pair having been damaged beyond repair. Du Casse then handed Kenway a new pair that he had collected from dead Assassins.

Before their meeting with Torres, du Casse and Rogers requested that "Duncan" show his skills in assassination techniques; thanks to Kenway's freerunning abilities, he was able to mimic these techniques with very little effort. The three then went to join Torres, who, after inspecting the blood vial Kenway had brought with him, led them inside, where he officially inducted them into the Order.

Torres subsequently revealed his plans of locating the Observatory, with the help of a Sage named John Roberts, which would further the Templars' goals of a New World Order. Du Casse expressed his skepticism to the credibility of a Sage, noting it had been over four decades since the last Sage was found, though Torres reassured him they were certain. After toasting their schemes, the group of Templars made arrangements to convene the next day at the Castillo de San Salvador de la Punta and then retired for the night.

The next morning, du Casse and his Templar allies met the captured Roberts, and mentioned that a Sage's blood was required to enter the Observatory. While escorting Roberts to Torres' mansion, the Templars managed to fend off an Assassin attack, during which the Sage was nearly able to escape. With Rogers leaving for England, the other Templars decided to imprison Roberts and interrogate him the day after.

However, Roberts managed to escape later that night, leaving a trail of bodies in his wake. When the Templars arrived at the prison, they found Kenway instead, who had just arrived with the intention of interrogating Roberts himself. Realizing he was an imposter, the Templars apprehended Kenway and sent him to be taken with the Spanish Treasure Fleet as a prisoner.

"Is petty larceny the extent of your ambition? Have you no mind to comprehend the scope of ours? All the empires on Earth, abolished! A free and opened world, without parasites like you! (May the hell you find be of your own making.)"
―Du Casse's final words, 1715.[src]

Following this turn of events, du Casse earned Torres' trust and was tasked with ensuring a constant flow of weapons, ammunition and gold to the Grand Master. As well as this, he was appointed captain of one of Torres' largest galleons, El Arca del Maestro, which du Casse would frequently dock in the natural cove of Great Inagua, his island hideout.

Unbeknownst to du Casse, however, Kenway had escaped his imprisonment aboard the Spanish Treasure Fleet, and later sought to acquire El Arca del Maestro, so that it could be used as a defensive measure for the pirate republic of Nassau. To achieve this, and prevent news of his survival from getting back to the Templars, Kenway infiltrated the island and bypassed du Casse's guards. While du Casse was busy preparing for another voyage, Kenway snuck onto the vessel's rigging and struck the Templar from above.

As he lay dying, du Casse berated Kenway for his small ambition and ignorance, calling him a "parasite", though the pirate ignored these words and took the key that was in du Casse's possession. Refusing to tell Kenway about the key's function, du Casse cursed the pirate, before passing away.

Kenway would later take du Casse's hideout for his own, renovating the village and manor, and collect the four other Templar keys to gain access to a special set of armor. 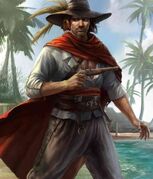 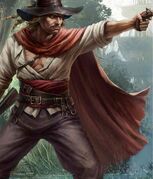 Retrieved from "https://assassinscreed.fandom.com/wiki/Julien_du_Casse?oldid=668499"
Community content is available under CC-BY-SA unless otherwise noted.