"H. and S. brought on the turmoil and fear necessary, now we must strike fast to ensure development continues in the proper direction."
―A member of Abstergo Industries referencing Stalin in a message, 1944.[src]

Ioseb Besarionis dze Jughashvili, later known as Joseph Vissarionovich Stalin (1878 – 1953), was the General Secretary of the Communist Party of the Soviet Union's Central Committee from 1922 until his death in 1953.

Under their influence, Stalin took a leading role in World War II alongside Adolf Hitler, bringing on the turmoil and fear necessary for Abstergo Industries to take control over the working population.[3] On 2 February 1945, Stalin met with British Prime Minister Winston Churchill and United States President Franklin D. Roosevelt in Yalta for a conference as a followup to their previous meeting in Tehran. There, they worked to discuss a plan to organize and divide Europe after World War II, one of which was a division of Germany into distinct military zones forming areas of occupation by the three states and France.[4]

Details of Stalin's assassination were later collected by the Assassin Clay Kaczmarek in 2012, and hidden in the Animus in Glyph puzzles for his successor, Desmond Miles to find. Which he did in September of that year.[6] Desmond solved this puzzle, which was part of a set titled "Guardians" where Stalin was included in the list of people of power assassinated.[5] The following month further details of Stalin and his Templar allegiance were found in similar puzzles called Rifts.[3] 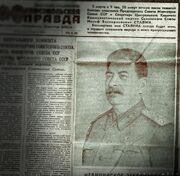 Retrieved from "https://assassinscreed.fandom.com/wiki/Joseph_Stalin?oldid=893568"
Community content is available under CC-BY-SA unless otherwise noted.