"We all know stories of executions gone awry - ears lopped off and so forth. No, we must have a better way, and thanks to science, that way is at hand. With this machine, built by Tobias Schmidt, I can cut off your head in the twinkling of an eye, and you never feel it!"
―Guillotin on the machine named after him, 1789.[src]

Joseph-Ignace Guillotin (1738 – 1814) was a doctor and notable figure in French medicine. During the French Revolution, he proposed a more humane and less painful way of execution, leading to the invention of the guillotine.

In 1789, Guillotin was elected to the Estates-General as a representative for the third estate. He became immensely popular among Parisians for his early support of the vote by headcount, rather than vote by estate, and joined the National Assembly.

He was also a philanthropist who proposed a reform of the capital punishment, arguing that it apply to everyone in the same way, regardless of social class. As the death sentence had previously been carried out with the sword or breaking wheel, Guillotin sought to create a more humane and less accident-prone alternative, hoping it would eventually lead to the complete abolition of capital punishment.

Along with Antoine Louis, he worked to improve a machine first devised by harpsichord maker Tobias Schmidt, which would decapitate the victim painlessly. However, the device was initially ridiculed, and negative reports in many newspapers claimed that it would remove the spectacle from public executions. In response, Guillotin contacted the Assassin Arno Dorian and had him print an article citing the merits of the device before discreetly switching it for the old reports.

The device soon came into use under the name "guillotine", and was first used to execute the highwayman Nicolas Pelletier. It was later used to execute King Louis XVI, who, according to a legend, advised Guillotin to use an angled blade for the device. The guillotine came into especially widespread use during the Reign of Terror.

Late into the Terror, Guillotin came into conflict with the Committee of Public Safety, and was imprisoned in the College of the Four Nations for a month. He was freed after the Thermidorian Reaction, in which Jacobin leader Maximilien de Robespierre was guillotined. He abandoned his political career and returned to medicine, supporting the newly discovered method of vaccination. 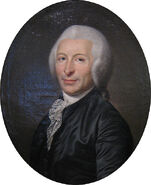