Sometime in 1999, Jonathan was staying at a hotel in Atlanta with a woman who was providing him useful information about the Templars. However, the woman was secretly a Templar agent and after the two had had sexual intercourse, the woman held Jonathan at gunpoint and told him not to move. At that moment a group of Templars, including Vernon Hest, entered the hotel room, arrested Jonathan and took him to a safehouse.[1]

Two hours later in the safehouse, Jonathan was interrogated and tortured by Vernon Hest who wanted information from the Assassin. Jonathan however, continuously remained silent and did not cooperate in the interrogation, which ultimately made Vernon stab Jonathan in the right eye with a screwdriver.[1]

At that moment, a pair of Assassins came to rescue Jonathan and eliminated the Templars guarding the building. After a short gunfight, all Templars were dealt with except for Vernon, who escaped by jumping through a window. Jonathan was saved from the Templars, though his right eye was so severely damaged that he lost his ability to see.[1]

In 2012, while in the Animus, Jonathan lived through the memories of his ancestor Accipiter of the Battle of Mediolanum in 259, between the Alemanni and the Romans in Aube. After spending a while longer with Accipiter's memories, Jonathan's nurse Nancy unplugged him from the Animus to let him rest for two hours, as longer sessions could be dangerous for his mental health.[2]

To remedy the loss of his eye, he went to see professor Terence, a professor speicialized in "optical technology", who proposed to execute a revolutionary transplantation: a miniature camera was to be implanted in his eye socket. Although Jonathan's artificial eyeball had been stolen two days earlier, the operation did not have to be postponed. How the thieves had proceeded and what they attempted to achieve was unclear; the eyeball, after all, was unable to function on its own.[3]

The conversation was then interrupted by a phone call from Stella Crow. Jonathan was subsequently instructed to go to Monteriggioni, Italy to gather all the information collected by another team headed by Shaun Hastings. Jonathan's team particularly wanted File 24 – a dossier about the Scepter of Aset – which had been already sent to Desmond Miles.[3]

After three days, Jonathan arrived in Monteriggioni and asked his fellow Assassins for the "Folder Nº24". In the process, he discovered he was a distant cousin to Desmond and, upon looking at the folder, Jonathan noticed a picture of an Egyptian pyramid, quickly realizing where his mission would take him next. The folder also contained information about the Scepter of Aset.[3]

Jonathan and the other Assassins discussed the purpose and power of the artifact. At last, Lucy Stillman gave Jonathan the Ankh they had retrieved and she told him that Stella could ‘meet’ her ancestor Lugos through the artifact. The Assassins then wished each other luck, with Jonathan returning to his cell based London.[3]

Back in London, Jonathan relived the memories of Numa Al'Khamsin, an Egyptian Assassin who came in contact with the Scepter. However, while he was in the Animus, Jonathan suffered a stroke, due to his low tolerance of the machine, and was escorted to the emergency room. The incident had happened due to Nancy, an assistant, having made a mistake while installing the timer, causing it deregulate and expose Jonathan to the Animus for a longer period of time than usual. Stella severely reprimanded Nancy, kicking her off the team and even threatening to consult the other cells in order to expel her from the Brotherhood.[3]

While Jonathan was unconscious, Steve, a Templar mole, saw the chance to kill him by removing his oxygen mask. However, Jonathan survived and confronted Steve, who was already being held at gunpoint by Nancy and Stella; they too had discovered Steve's defection to the Templar cause. Steve then tried to flee, but Jonathan chased him down and killed him.[4]

Jonathan continued his Animus sessions, but was given more breaks as a precautionary measure. During one such break, he and Nancy had a profound conversation about their relationship. Nancy was in love with Jonathan, but he thought it was a bad idea to "fall in love with a soldier". Nevertheless, the two kissed, but were interrupted by a phone call from professor Terence; Jonathan would undergo the transplantation the next day.[4]

The transplantation was successful; although he could not use his left eye anymore, his new camera-eye improved his eyesight and field of view significantly. Returning to his Assassin cell the following day, Jonathan wished to return to his Animus session immediately and continue the search for the Scepter of Aset.[4]

Retrieving the Scepter of Aset

Some time later, Stella had found out the location of the Scepter, by reliving the memories of her ancestor Ali Al-Ghraib. Ali, who was by chance the young disciple of Numa Al'Khamsin, had thrown the Scepter in a well near Edfu after his master was trapped and killed by the Templar Leila. The boy had the intent to contact the Brotherhood and come back later, but died a few weeks later of food poisoning, from eating tainted meat.[1]

Jonathan was in doubt whether they should look for the Scepter or not, since the exact location of the Scepter and what happened to it after it was thrown into the well was unclear. Stella however, told Jonathan that "the lack of certainties is the essence of the Brotherhood" and insisted that they should take action. Although Jonathan still thought the plan was risky, he ordered an airline ticket to Egypt and was to await the coordinates of the Scepter's last known location.[1]

Arriving at the international airport in Egypt, Stella sent Jonathan an encrypted message with the exact coordinates of the Scepter. He then took a taxi to Edfu to a jewelry shop, which had been built upon the well. Inside the shop, Johnathan asked the salesman if he could use the toilet and went to a shed behind the store. Once there, by using the night vision of his robotic eye, the Assassin was able to find the well rather quickly and began digging.[1]

Meanwhile, the Templars had also discovered the location of the Scepter through Mike examining the memories of Leila, an ancestor of Vernon Hest. Vernon was then assigned to Edfu with the same goal as Jonathan; to retrieve the Scepter.[1]

Arriving at the shop, Vernon asked the taxi driver and the shop owner where to find Jonathan, which led him to the shed behind the store. Blinded by complete darkness, Vernon was unable to see the Assassin, but ironically, Jonathan could see him due as a result of the pain the Templar had caused him years ago. [1]

In a desperate attempt to shoot his archrival, Vernon was pushed into the well by Jonathan, resulting in an instantaneous death upon hitting the ground. Ultimately, Jonathan had been successful and returned the artifact to Assassin hands.[1]

A while later, Jonathan and Nancy celebrated their victory and the two had a romantic dinner. When Nancy asked Jonathan why he was not celebrating his accomplishment with the Assassin leaders or discussing what they should to with the artifact and its power, Jonathan answered that power did not interest him and that he even considered quitting the Order.[1] 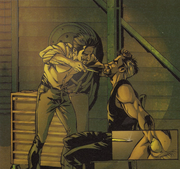 Jonathan being interrogated by Vernon Hest

Jonathan inside the Animus

Jonathan hospitalized after the incident

Jonathan after the eye transplant