John the Baptist (died 31/36 CE), born Yôḥānān (Hebraic name), was an itinerant preacher, and a major religious figure who baptized Jesus Christ. The son of Zechariah, he led a movement of baptism at the Jordan River, and held leadership over many disciples.

John was in the possession of one of the Staves of Eden, which he used to start his ministry. After him, Saint Peter would take the Staff and use it to spread the religion of Christianity.[1]

During the Middle Ages Theodora Palaiologina, consort of the Byzantine Emperor Michael VIII Palaiologos, erected a church and dedicated it to John.[2]

John was also the patron saint of the Italian city of Florence. One of Florence's district was named after him.[3]

During the Renaissance the famed polymath Leonardo da Vinci painted a portrait of John the Baptist, with his apprentice Salaì as the model.[4] A few other paintings of John were displayed in Ezio Auditore da Firenze's painting galleries, often depicting him with Jesus.[5]

In 2012, John was one of many historical people included in the Glyph puzzles the late Assassin Clay Kaczmarek had left behind in the Animus as messages for his successor Desmond Miles to decipher. Desmond later did in September of that year.[6] Desmond solved this puzzle, which was part of a set titled "Instruments of Power" where John was included in the list of historical individuals revealed by Clay to have wielded a Staff of Eden.[1] 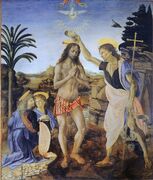