"What a pitiful fool you are... What will the people rely on now to ease their troubled minds? To keep them happy in this bleak, modern world of ours?"
―Elliotson defending the Soothing Syrup, 1868.[src]

John Elliotson (1791 – 1868) was an English author, teacher and physician that worked at the Lambeth Asylum in London during the mid-19th century. He was also a member of the British Rite of the Templar Order.

In 1868, Elliotson began producing Starrick's Soothing Syrup, a medicinal tonic that many of London's residents became dependent on, thus strengthening the Order's control over the city's population.

"He was a brilliant heart specialist, until he became obsessed with phrenology and mesmerism. It ruined his career."
―Charles Darwin on Elliotson, 1868.[src]

Born to a prominent chemist and apothecary, Elliotson studied at Jesus College in Cambridge. Initially a talented heart specialist, he became fixated on the pseudoscience of mesmerism. Elliotson began performing experiments on the sisters Elizabeth and June Okey, whom he believed could see diseases in others.[1]

These practices brought an end to Elliotson's respected position within the medical world. Although he attempted to salvage his career through the study of phrenology, his practice declined to the point that he was virtually destitute. Around that time Grand Master Crawford Starrick contacted Elliotson and offered him work, which the doctor gladly agreed to.[1] At some point, Elliotson also became personally acquainted with the Assassin Ethan Frye.[2]

"It's all he drinks! Your syrup is liquefying him. It's turning him simple-headed!"
―A customer complaining to a merchant about the Syrup, 1868.[src]

In 1868, Elliotson,[3] on the orders of Starrick, created a concoction that consisted of datura stramonium and opium. Dubbed Starrick's Soothing Syrup, it was marketed as a cure for all ailments and quickly spread across the city via distributors, rendering many of London's residents mentally weak and subservient. Elliotson also had batches of the tonic delivered to Lambeth Asylum, where he worked, so he could use it on the local patients.[4]

However, that same year, Elliotson was informed that the Assassin Jacob Frye, Ethan's son, had destroyed the distillery where the Syrup was being made.[5] Without a continuous supply of new tonic, the doctor was forced to restrict its use within the asylum. During a demonstration of trepanation to his students, Elliotson accidentally killed the subject, leading him to have another cadaver sent up from the morgue.[6]

Unbeknownst to Elliotson, Jacob had taken the place of the body and was escorted right to the auditorium, where he assassinated the doctor. As he lay dying, Elliotson mocked the Assassin for thinking his death would prevent Starrick from realizing his designs for humanity and questioned whether Jacob had considered the consequences his actions might have.[6]

Indeed, while Elliotson's elimination ensured production of the Syrup ceased permanently, thus cutting off one of Starrick's principal revenue streams, it also caused the asylum to close down. As well as this, medical care throughout the city was in disarray, as people turned to counterfeit tonics in the Syrup's absence. Meanwhile, genuine medicine was being stolen and sold to the highest bidders; thankfully, the situation would improve after Florence Nightingale began petitioning for regulations.[6] 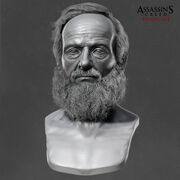 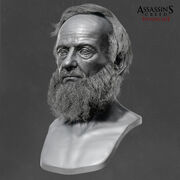 Elliotson operating on a subject

Elliotson having killed the subject

A dying Elliotson being held by Jacob