John Dee (1527 – 1608 or 1609) was a Welsh mathematician, astronomer, astrologer, occultist, navigator, imperialist and consultant to Queen Elizabeth I. He devoted much of his life to the study of alchemy, divination and Hermetic philosophy.

In 1587, he and his family were living with Edward Kelley and his family in Bohemia. Together, they performed studies involving a Piece of Eden known as the "Book". At this point, John Dee was also in the possession of a Crystal Ball. Kelley's stepdaughter Elizabeth Jane Weston once discovered it and unwrapped it from its cloth binding, but Dee quickly found her and took the Crystal Ball from her.[1]

Sometime later, Dee and Kelley entered into an argument about the Book, saying that it would destroy Kelley if he kept working with it. This led to a fight between the two, causing Dee to leave Kelley and his family in May 1589.[1]

In 1603, after Elizabeth Jane Weston married Johannes Leo and Queen Elizabeth I had died, Dee sent Elizabeth a wedding gift with Elizabeth I holding a golden apple and three goddesses standing at her side; the event resembling the Judgment of Paris. In an additional letter, Dee explained that the object the Queen was holding and the three goddesses were all real.[1]

Some time later, he sent another letter to Elizabeth, recommending her to watch the play by the Bard of Avon, saying that he thought she would "find the subject matter of this play prevalent to [her] liking."[2] 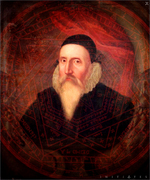 An illustration of Dee