"Whatever they say about me, it's probably true. Why not just run with that and leave me alone. Haven't you heard? I'm a monster? Driven by greed and bloodlust. That's all anyone really wants these days anyway, isn't it?"
―Joe, regarding his reputation.[src]

"Joe" was believed to be a psychologically unstable mercenary who murdered civilians in the streets of New York, but was in fact an extraordinary member of the Assassin Brotherhood, with justice as his primary motivator, killing those who abused women.

Since he avoided daylight, Joe always moved during the night, instilling fear into the populace. Since it led to him gaining such an infamy, his name was only ever spoken in hushed tones. However, since his true name was known to none, he gained the moniker "Joe", after one of his Templar victims screamed out the name before he struck them down.

In 2012 and 2013, his genetic memories were used as an Animi Avatar by the entertainment branch of the Templar company Abstergo Industries, to influence the general public via the Animus games console, under the title of the Night Stalker. 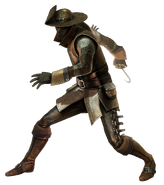 Joe, as he appears in the Animus games console 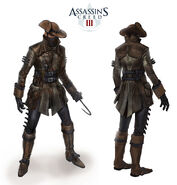 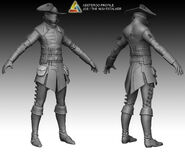 Development model of Joe
Add a photo to this gallery

Retrieved from "https://assassinscreed.fandom.com/wiki/Joe?oldid=856968"
Community content is available under CC-BY-SA unless otherwise noted.