"Am I not the eldest Khan? I will have more than a quartered empire."
―Jochi Khan.[src]

Jochi Khan (Mongolian: ᠵᠥᠴᠢ; c. 1182 – February 1227) was the eldest son of Genghis Khan, founder of the Mongol Empire, and his principal wife Börte.

In February 1227, Jochi was, unknown to the Mongol warlord, being tracked by the Assassins Qulan Gal and Darim Ibn-La'Ahad as he moved through Central Asia. One night, under the cover of darkness, Darim snuck into Jochi's tent and placed a few drops of poison into his waterskin. Later, Qulan witnessed the death of the Mongol chieftain, hearing his last words.

Despite being the eldest of Genghis Khan's sons, and numerous successes on the battlefield, Jochi was not named as the Great Khan's successor. While controversial at the time, this issue became irrelevant when Jochi passed away before his father. He was, however, posthumously named first Khan of the Ulus of Jochi, one of Mongol khanates that formed after the fragmenttaion of his father's empire. 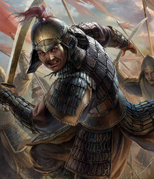