watch 02:34
Wiki Targeted (Games)
Do you like this video?
Play Sound

Jean-François Champollion (1790 – 1832) was a French scholar, philologist and orientalist as well as the decipherer of the Egyptian hieroglyphs.

A student of oriental languages, particularly Arabic and Persian, at the esteemed Collège de France, Champollion showed exemplary linguistic talent and began to learn Coptic. At the young age of eighteen, he was appointed professor of history at the University of Grenoble, due to his proficiency as a scholar.[1]

After the armies of Napoleon Bonaparte took the Rosetta Stone from Egypt in 1799, Champollion acquired a copy of the stone's transcripts. He suggested that the hieroglyphs displayed on it consisted of both ideograms, expressing ideas, and phonograms, expressing sounds. Starting in 1820, Champollion eventually deciphered the hieroglyphs, and was able to unveil a previously unknown part of Egyptian history.[1] Champollion compiled his research on the ancient language in his autographical manuscript, La Grammaire égyptienne.[2]

At some point, Champollion became an ally of the Parisian Brotherhood of Assassins. When the Templars obtained a rubbed transfer of the missing section of the Rosetta Stone, he warned the Assassins that the rubbing contained sensitive information on the Brotherhood. The Templars split the rubbing into three parts and scattered them around the Luxembourg Gardens, where they were kept under guard.[3] 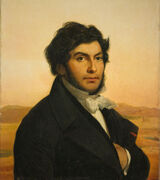 Retrieved from "https://assassinscreed.fandom.com/wiki/Jean-François_Champollion?oldid=939313"
Community content is available under CC-BY-SA unless otherwise noted.