"Show me the dark hearts of men."
―The Jaguar.

The Jaguar (harvested from: Cuali) was an Animi Avatar used by the entertainment branch of Abstergo Industries, as part of their plan to influence the general public, via the console stage of the Animus technology. He was only available through a system update, and wielded a tribal hatchet as his specialty weapon.

The Jaguar had several unique moves:

Facing his target, the Jaguar pulls out his hatchet and butts its head into their stomach, winding them, which makes them bend over. After this, he swings the weapon down at his victim's exposed back, severing their spine and subsequently killing them. Following this, he then removes his axe as he watches them collapse backwards.

Behind his target, the Jaguar takes out his hatchet and embeds it into the right of their hip, making them recoil in agony, before he removes his weapon and strikes down hard in between their shoulder blades. Driving his victim to their knees, he lets them collapse as he sheathes his weapon.

Facing his target, the Jaguar takes ahold of his hatchet and swiftly slices it across their neck, causing them to spin around. He then quickly follows up on this attack by embedding his weapon into his wounded victim's side and roughly pulls it free again, yanking them to the ground where they die of blood loss.

Behind his target, the Jaguar grabs his hatchet and acrobatically jumps upwards, before brutally embedding his weapon in his victim's back. Using the force of the blow, he pushes them down to the ground and then roughly pulls his axe free, before storing it at his waist.

Rushing towards his target, the Jaguar embeds his hatchet into their chest, before swiftly ripping it out again. As they remain barely able to stand from the ordeal, the Jaguar spins around and uses the added momentum to deliver a devastating kick to his victim's face, causing them to unceremoniously hit the ground, dead from their former wound.

Sprinting behind his target, the Jaguar draws his hatchet and drives his knee into their back, shunting them onto their hands and knees. As they lay stunned, he forcefully swings his axe into the crevice between his victim's shoulder blades, severing their spine and killing them instantly.

Jumping down from above, the Jaguar pounces onto his target with his axe, before he brutally smashes it into their head, killing them instantly. Following this, he gets up and hastily yanks his weapon out, leaving their body on the ground where it lays.

Grabbing his seated target's foot, the Jaguar drags them off the bench until their head rests against it. Before his victim can do anything to defend themselves, he forcefully kicks them in the face, violently sending their head backwards and breaking his target's neck on the bench behind them.

The Jaguar could be customized in several ways:

Promotional art for the Jaguar

Concept art of the Jaguar

The Jaguar leaping to kill the Navigator

The Jaguar, along with the Orchid and Blackbeard 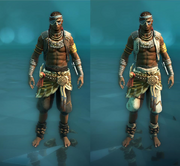 Templar and Assassin Costumes for Jaguar 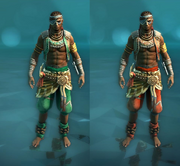 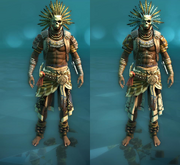 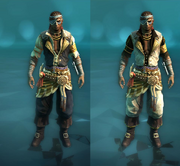 Retrieved from "https://assassinscreed.fandom.com/wiki/Jaguar?oldid=831108"
Community content is available under CC-BY-SA unless otherwise noted.