Assassin's Creed Wiki
Register
Don't have an account?
Sign In
Advertisement
in: Articles in need of sources, 1244 births, 1314 deaths,
and 10 more

"A symbol can inspire fear, and fear can inspire control - but men inevitably lose their fear of symbols. [...] This was the truth de Molay died for: the Divine Right of Kings is nothing but the reflection of sunlight upon gold. When the Crown and Church are ground to dust, we who control the gold will decide the future."
―François-Thomas Germain, 1793.[src]-[m]

Jacques de Molay was born a Sage in 1244 in Molay in the Free County of Burgundy. In 1265, de Molay was inducted into the Templar Order in Beaune. After the fall of Acre, the Order met in Cyprus in September 1291. On 20 April 1292, de Molay was elected Grand Master, leading the Templars to the height of their power.[1] Around this time, he possessed the Shroud of Eden, which later wound up in the possession of a fellow French Templar, Geoffroy de Charny.[2]

In 1305, Pope Clement V asked the leaders of various military orders for their opinions on a new crusade and the merging of three main knightly orders of the Knights Hospitalier . While de Molay opposed a merge, King Philip IV of France favored it, specifically wishing to merge the orders into a force under his command.[3]

At some point, de Molay wrote the Codex Pater Intellectus.[4] With the Templars already serving as an economic power through banking, he envisioned in the Codex that the Templars should control humanity through finances, rather than through the aristocracy and monarchy.

Even as the Templars entered a Golden Age, Philip, strongly indebted to the Order, sought to disband it and claim its wealth. In the meantime, the Assassins had begun to weaken the Templars. Philip unknowingly served the Assassins through his advisor Guillaume de Nogaret, Mentor of their French Brotherhood.[4]

"The Assassins are far older than Masyaf, my friend. Their anarchic delusions are virulent as the plague, and less easily eradicated. We will not prevail this night. But if you make haste, we may yet save our Order."
―De Molay to his advisor, 1307.[src]-[m]

On 13 October 1307, raids were carried out across France with the intent of arresting all Templars. The Templar headquarters at the Temple were also raided by Assassins disguised as Flemish mercenaries, led by Esquieu de Floyrac and the Master Assassin Thomas de Carneillon.[4]

As the attack commenced, de Molay spoke with his advisor and deduced that the Assassins were responsible. The advisor expressed his belief that the Brotherhood's power had been broken with the fall of Masyaf to the Mongol Empire seventy years earlier, but de Molay told him that the Assassins were indeed not destroyed and instructed the advisor to hide the Codex and the Templars' Sword of Eden, before leading his men in battle.[4]

While the advisor was able to hide the Codex and Sword, de Carneillon assassinated him before the man could rescue the Grand Master from being captured. As a result of the raids, nearly every Templar in France was arrested.[4]

In 1312, the Templar Order was officially dissolved by Pope Clement in his papal bull Vox in excelso, and all of its assets were gifted to the Knights Hospitalier.[1]

"Pope Clement, hear me! Before this year is out, you will answer for your crimes before God almighty. And you, King Philip, no punishment is too heinous for the great evil you have inflicted upon the Temple. I curse you! Curse you to the thirteenth generation of your blood! You shall be cursed!"
―Jacques de Molay's dying words, 1314.[src]-[m]

Following the arrest of the Templars, de Nogaret levelled charges against them, including heresy, blasphemy, and the worship of a deity known as Baphomet. During his imprisonment, de Molay was tortured by de Nogaret, Philippe de Marigny and William of Paris, and was forced to confess to these charges. As their Grand Master, de Molay understood that the Templars could no longer survive in a public image, and decided to make the ultimate sacrifice. Before his inevitable death, he sent nine of his most trusted men—each of whom possessed vital knowledge of the Templars, the First Civilization, and the Assassins—out into the world to continue the Templars' work. The Templars would fade from public awareness and secretly influence leaders.[5]

On 18 March 1314, de Molay allowed himself to be burned at the stake alongside Geoffroi de Charney. As he burned to death, he cursed Philip to the "thirteenth generation of [his] blood".[4] By allowing himself to be executed, de Molay saved the lives of his remaining brethren, and made their enemies believe that the Order had died along with him.[5]

In 1429, while in the same prison cell as de Molay, the Assassin Jean de Metz told Gabriel Laxart to access his Eagle Vision to decipher de Molay's scribbles, but Laxart could not.[6]

In the late 18th century, Jacques' codex would be uncovered by the French Sage and silversmith François-Thomas Germain, who would use de Molay's writings for controlling the world through finance rather than oligarchy to help bring about the Reign of Terror during the French Revolution.[4] Also during the Revolution, de Molay's descendant Anne murdered two descendants of his interrogators. She failed to murder the third, which resulted in the French Assassin Arno Dorian handing her over to the police.[7]

De Molay was later commemorated in 1937 by the Templar Order's new public front, Abstergo Industries. An image of him was displayed prominently in a room accessible only to members of the Order's Inner Sanctum.[5]

In 2001, researchers at the Vatican Secret Archives uncovered a parchment written in 1308 by Pope Clement which absolved de Molay of all charges.[1]

In 2016, while reliving the memories of his ancestor Gabriel Laxart, Templar Inner Sanctum member Simon Hathaway sent a record of de Molay's scribbles to Abstergo cryptologist Zachary Morgenstern for deciphering.[6]

De Molay giving the task to his advisor 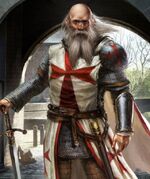 An illustration of de Molay

A painting of de Molay's ordination

An illustration of de Molay being tortured 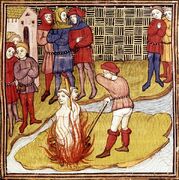 A miniature of de Molay's execution

An illustration of de Molay's execution

De Molay engraved the walls of his cell