"Show some courtesy! I must perfectly capture the death of such a hero to the people! I need to focus!"
―Jacques Louis David to Arno Dorian, 1793.[src]

Jacques-Louis David (1748 – 1825) was a famous and highly influential French painter of the Neoclassical era.

David actively supported the French Revolution, joining the Jacobin Club, producing a drawing of the Tennis Court Oath and befriending the noted Jacobin Maximilien de Robespierre.[1] As Robespierre and the Jacobins came to power in 1793, the former collaborated with David to use art and culture as a political tool.[2]

After Louis-Michel le Peletier was killed in January 1793, David produced a painting of him, which the former's daughter, Louise-Suzanne, would later destroy. When the radical revolutionary Jean-Paul Marat was murdered in his bathtub by Charlotte Corday in July of that year, David visited the scene of the crime to produce one of his most famous paintings: The Death of Marat.[1] The Assassin Arno Dorian also visited the scene to investigate the murder. On being questioned by the Arno however, David brushed him off, stating that he was preoccupied with his painting.[3] The painting would go on to immortalize Marat as a Jacobin martyr concerned with the safety of France.[2]

The poet André Chénier despised David, considering him a "most despicable propagandist", and wrote a series of satirical poems about him called Le Jeu de Paume. Infuriated, David called in favors from Robespierre and his supporters and had them take over Chénier's house and keep the poems under guard. However, Chénier sent Arno to recover them.[4]

When Robespierre hosted the Festival of the Supreme Being at the Champ de Mars on 8 June 1794, David collaborated with opera composer François-Joseph Gossec and André Chénier's brother, the dramatist Marie-Joseph Chénier, to organize the festivities.[2] David commissioned the construction of an artificial mountain made of plaster and cardboard, on top of which stood a 50-foot column holding a statue of Hercules.[5]

Jacques-Louis David being questioned by Arno Dorian while he's painting 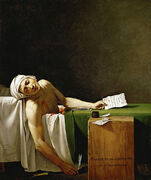 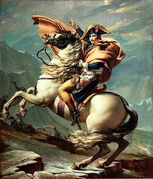 The Emperor Napoleon in His Study at the Tuileries (1812)

Leonidas at Thermopylae (1814)
Add a photo to this gallery

Retrieved from "https://assassinscreed.fandom.com/wiki/Jacques-Louis_David?oldid=868456"
Community content is available under CC-BY-SA unless otherwise noted.