"This country here is my best chance. This country called Jackdaw, where I know the names of all the citizens and they know mine, and we work together. Not always out of love, but to keep our country afloat."
―Adéwalé to Edward Kenway, 1717.[src]

40
The Jackdaw was a brig captained by the pirate-turned-Assassin Edward Kenway, which he obtained with the help of Adéwalé, during the Golden Age of Piracy in the Caribbean.

Before Kenway's captaincy, the ship was known as El Dorado, and formed a part of the Spanish Treasure Fleet. Upon securing her, Kenway renamed the vessel Jackdaw, after the bird of the same name.

After an imprisoned Edward Kenway was placed on a ship in the fleet bound for Spain, he met his future quartermaster, Adéwalé, who helped free Edward from the bilboes and assisted him in incapacitating the guards until the pirates retrieved their equipment.[1]

Following this, the pair secured a crew by freeing other prisoners from their Spanish captors, and set their sights on a brig within the fleet, El Dorado. Subsequently, Kenway used the pirates he freed to escape from the fleet under the cover of a hurricane. While El Dorado managed to successfully navigate the natural disaster, the remaining ships sank during the pursuit. Later on, Kenway then rechristened the ship the Jackdaw, after a small, swift bird from his homeland of Wales.[1]

Edward: "It's a shaky feeling, sailing around with this much stolen cargo."
Hornigold: "Get used to it. We'll need to take a few more prizes to make this a profitable day."
—Edward Kenway and Benjamin Hornigold, after the Jackdaw took its first schooner, 1715.[src]

The Jackdaw's first major act of piracy took place off of the coast of Nassau in 1715, when captain Benjamin Hornigold showed Kenway how to successfully take a ship. It was after this voyage that the brig was given its very own black flag.[1]

Soon after, it was used to transport Kenway to Cat Island to plunder a plantation, and eventually followed a Spanish Man O' War, El Arca del Maestro, through the Bahamas to its moorings at Great Inagua. Kenway then infiltrated the island, killed the French Templar Julien du Casse and took both the ship and the island. It was here that he would establish his own base of operations, and the Jackdaw could often be found moored at the docks in the cove.[1]

The Jackdaw traveled across the West Indies Sea to the ancient city of Tulum, home of the Caribbean Assassins, where the crew members were soon taken prisoner by Laurens Prins; Kenway soon freed his crew and they returned to sea. Shortly after, the ship took its first fort, located at Punta Guarico, and made sail for Kingston. After Kenway killed Prins, the ship returned to Nassau.[1]

However, the Pirate Republic was suffering from disease, prompting Kenway to outfit the Jackdaw with a diving bell in search for medicines. When he came up empty, he followed his fellow pirate Edward Thatch to Charles-Towne to secure medicines before returning again to Nassau.[1]

After the city was blockaded by the British, the Jackdaw, along with Charles Vane's ship, the Ranger, was able to escape and flee to Great Inagua. There, Kenway made plans to find Thatch again and set sail for Ocracoke. When the pirates were ambushed by the Royal Navy, the Jackdaw was the only vessel to escape.[1]

The Jackdaw and the Ranger met up again off the coast of Cuba, in pursuit of a ship that would lead them to Bartholomew Roberts. However, Vane's associate Jack Rackham had engineered a mutiny, taking the Jackdaw and leaving Kenway and Vane marooned on Isla Providencia.[1]

Kenway managed to make his way back to Great Inagua, where Adéwalé and Mary Read had taken the Jackdaw from Rackham. Kenway soon set sail again, returning to Kingston before continuing on to Príncipe, where Roberts had gone into hiding. After freeing Roberts, he followed him to the coast of Mexico, where the two infiltrated and battled a Portuguese fleet before sailing for the Observatory, Kenway's ultimate goal.[1]

Along the way, the Jackdaw chased Hornigold's ship, the Benjamin, through a fog bank before Kenway assassinated his former friend, clearing the way to the Observatory. When Roberts betrayed Edward deep inside the complex, Adéwalé and the crew quickly fled without their captain. It would be almost a year before Kenway would be reunited with his ship in Kingston, although Adéwalé chose not to join his captain, revealing his intentions to join the Assassin Order and suggesting that Edward do the same.[1]

Shortly thereafter, the vessel returned again to Tulum, where Edward allied himself with the Assassins and received three targets: Woodes Rogers, Laureano Torres, and Roberts. The Jackdaw's flag was replaced with one bearing an Assassin insignia, and Anne Bonny took Adéwalé's place as quartermaster.[1]

Edward sailed for Kingston to eliminate Rogers. In turn, the Templar revealed Roberts' location in Príncipe, where the Jackdaw sailed next. In a tremendous battle between the Jackdaw, Roberts' ship Royal Fortune, and a Spanish fleet, Kenway managed to kill Roberts and retrieve the Observatory's Crystal Skull.[1]

The ship then carried her captain back to Havana, where Edward discovered Torres was already on his way to the Observatory. He soon followed in hot pursuit, making his way through the jungle and the complex, before finally killing the Grand Master. The Jackdaw then made one last trip back to Great Inagua, where Edward finally retired from piracy, deciding to care for his newly discovered daughter Jennifer Scott.[1]

In 1722, Edward, Jennifer, and the crew left Great Inagua and sailed the Jackdaw to Bristol in the United Kingdom, stopping on one of the islands of the Azores along the way. Near the Bristol Channel, the black flag of the Jackdaw was bought down, folded and placed carefully inside a chest in the captain's cabin. The Jackdaw then flew a Red Ensign to gain permission to dock in Bristol.[2]

Two days later, Edward used the Jackdaw as an auxiliary when he was about to kill Matthew Hague. The former pirate imprisoned Hague in the captain's cabin of his ship, the Charlotte, after which the Jackdaw's crew tossed Edward barrels of tar which he could use to set alight Hague's ship. However, Edward was interrupted by Sir Robert Walpole, who wanted to make peace between the Assassin and the Templar. The pair came to an agreement, with Edward releasing Hague and Walpole giving a pardon and small properties to the pirates.[2]

Soon after, Edward donated the Jackdaw to the Assassin Brotherhood,[3] though he kept her original wheel in the basement hidden below his mansion in London and it was used as part of a mechanism for opening a secret exit.[4] It is unknown what happened to the Jackdaw in the intervening years, but at some point prior to 1735, the brig had returned to the West Indies, where she sank off the coast of Hispaniola due to unknown circumstances. Its figurehead was later recovered from the wreckage by Adéwalé.[5]

The Jackdaw was 60 meters long from her stern to the tip of her bowsprit, 48.5 meters high, had a width of 11.9 meters, and also had twenty-six sails. Accompanying this, the Jackdaw was armed with forty-six broadside cannons, four chaser cannons, and two swivel guns. Further, she could hold 160 fire barrels, deployed four at a time, 25 volleys of heated shot, and 20 mortar rounds, and was equipped with an iron-plated naval ram. Besides her weaponry, she could also hold a maximum of 2,000 pieces of each type of cargo; sugar, rum, cloth, wood, and metal.[1]

At her strongest, the Jackdaw possessed a sizable amount of iron-plating reinforcement across her hull, which provided ample protection in combat against a number of Men O' War. The brig was able to disable and destroy any type of ship, given the proper strategy in battle.[1]

She was also equipped with a diving bell for exploration of various underwater wrecks, as well as a whaling rowboat and harpoons, which allowed Edward to hunt for local sea life. Her masts featured pedal-activated lifts and hooks to allow for both ascension and descent. The Jackdaw also had cleverly placed swinging ropes secured both on deck and in the cross-masts, which were used by the crew to swing from one ship to another during boarding, and to quickly leap off the ship into the ocean or onto land.[1]

While the Jackdaw did not participate in any major historical battles of the era, she still had more than her fair share of legendary combat. Notable skirmishes, such as the battle which took Blackbeard's life near Ocracoke, the conflict with Hornigold's ship, the Benjamin, and the later conflict off the coast of Príncipe – in which Bartholomew Roberts was killed – were fought on the Jackdaw's decks.[1]

The ship was a formidable raider in the Caribbean, as it single-handedly outgunned and destroyed all of the naval forts around the Caribbean over time, and took down many ships, from gunboats to Men O' War, including the five legendary ships that roamed the Caribbean Sea: El Impoluto, the twin ships HMS Fearless and Royal Sovereign, La Dama Negra, and HMS Prince.[1]

Through crafting, Edward could upgrade the Jackdaw in a number of ways to enhance its weapons strength, hull durability, speed, cargo hold, and crew capacity, and whaling equipment.

A wide variety of figureheads, sail designs and wheels are available for the Jackdaw.

Concept art of the Jackdaw

Concept art of the Jackdaw's deck

The Jackdaw's flag before Edward joined the Assassins

The Jackdaw's flag after Edward joined the Assassins

The Jackdaw sailing the Caribbean

The Jackdaw engaging a fort's defenses

The Jackdaw escaping the attack on Ocracoke

The Jackdaw docked in Great Inagua 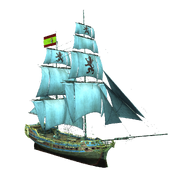