http://www.assassinscreed.com
Jack the Ripper is a single-player downloadable content addition for Assassin's Creed: Syndicate and was released on December 15, 2015 for PS4 and Xbox One, and on December 22 for PC. The content is available with the purchase of the Season Pass or as a standalone purchase.

20 years after the events of Assassin's Creed Syndicate, 'Jack the Ripper' has embarked on a brutal reign of terror that shocks London to its core and threatens the very existence of the Brotherhood of Assassins.

The story begins with the Assassin Jacob Frye meeting Mr. Weaversbrook, who Jacob warns not to publish Jack's letters as he wants to spread fear in London. Soon after Nellie arrives to inform Jacob about the next victim of the Ripper, and on reaching the crime scene they find two women murdered. Jacob goes after the Ripper, who begins following him before eventually attacking. After surviving the attack, Jacob reaches his lodgings, but the Ripper arrives and attacks again. This time however, he goes for the kill, although it is unknown whether Jacob is dead or not.

Following the incident, Jacob's sister Evie Frye arrives from India where she is greeted by police inspector Frederick Abberline, who informs her that Jacob is missing and can be presumed dead. He also tells her that she may be the last Assassin in London, and the only one capable of stopping the Ripper. After finding Jacob's lodgings Evie takes some non-lethal fear tools used by the Indian Brotherhood, and begins hunting the Ripper. After unearthing the Ripper's hideout beneath Lambeth Asylum she attacks and kills him, before discovering that Jacob is alive. 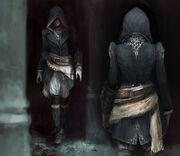 Jack the Ripper chasing after a target

Jack the Ripper advancing on a target

Evie about to inspect one of the Ripper's victims

Jack the Ripper overlooking a fight 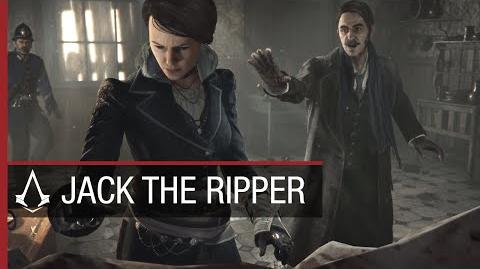 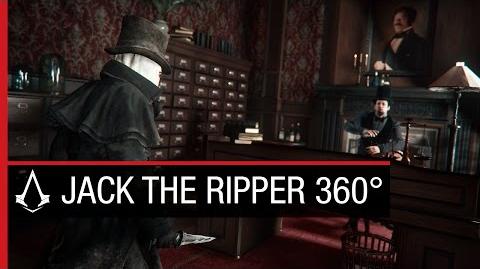