Start a Wiki
watch 01:56
'Assassin's Creed' Profile: Jack the Ripper
Do you like this video?

"Grand work the last job was. I gave the lady no time to squeal. How can they catch me now... I love my work and want to start again."
―Jack, regarding his work, 1888.[src]

Jack (unknown – 1888), formerly known as Jack the Lad during his youth, and widely feared under the alias "Jack the Ripper", was a member of the British Brotherhood of Assassins, active in the Whitechapel district of London.

Up until 1888, Jack became infamous following a series of gruesome murders of young women; in reality, these women were fellow Assassins disguised as prostitutes who attempted to stop his spiral of madness. These murders, in conjunction with Jack's control over London's criminal enterprise, threatened the discreet reputation and very existence of the Assassins in London.

"Where was Jacob when Starrick's men gutted my mother? Where was he when they dragged me to the madhouse?"
―Jack, to Evie Frye, regarding his childhood trauma.[src]

Jack was born and raised in the Whitechapel district of London, where he lived alongside his mother until she was murdered by the Templars of Crawford Starrick. Traumatized by her death, Jack was placed in Lambeth Asylum, where poor treatment and negligence only further aggravated his mental instability. After the death of Starrick in 1868, he was liberated from the asylum and brought into the Assassin fold by Jacob Frye to be trained among a selection of new initiates.

Around 1873, he traveled with Jacob and the other initiates to India in order to learn the fear tactics of the Indian Brotherhood, a group that Jacob's sister, Evie Frye, had joined.

"Jacob freed me from the madhouse, riddled by guilt... He saw something in me and made me 'Assassin'... but I grew—grew to see his weakness and knew what I had to do."
―Jack, regarding his opinion of Jacob Frye.[src]

Upon returning to London, Jack began to develop an extremist view of the Assassins' mission. Eventually, Jack usurped control of the Rooks from Jacob and killed anyone sent to deter him. Radicalizing his followers, Whitechapel – the center of Jack's operations – descended into a cesspool of crime and depravity.

"The world will know of my terror!"
―Jack, declaring his ill intentions.[src]

During the Autumn of Terror, Jack murdered a number of Assassins sent after him by Jacob, including "Mary Ann Nichols", "Annie Chapman", "Elizabeth Stride" and "Catherine Eddowes". With these murders, Jack, under the pseudonym of "Jack the Ripper", started to attract media attention; Arthur Weaversbrook in particular – under duress due to Jack having kidnapped his son – began to publish Jack's letters for the public to inquire.

Having left a message for Jacob nearby, after his former mentor had demanded that Weaversbrook stop publishing the Ripper's letters, Jack trailed and kidnapped a fleeing Jacob, defeating him in combat and locking him up beneath Lambeth Asylum.

Before he was kidnapped, Jacob requested by letter that Evie return to London. With her return, Jack saw the gradual disruption of his plans. He was eventually lured out of the shadows by the assassination of Olwyn Owers at Evie's hands; after Evie assassinated his right-hand woman, Jack killed all of the occupants at Owers Manor and subsequently framed the former for the massacre.

As part of his mission, Jack kept hostages in old Navy ships and forced them to write to their families, making demands that were to be met in exchange for the lives of their abducted loved ones. This part of his plan too was thwarted by Evie, as she dismantled his private prison, assassinated his Chief Warder, and informed the police about the abducted hostages. Consequently, Jack resolved to eliminate any witnesses at Deptford that knew of his actions as well as any evidence linking him to the Assassins, in an effort to protect the Brotherhood and his new Creed.

Jack: "We are the same you and I..."
Evie: "Oh, Jack... You were an Assassin, yes, but we are not the same. And that is why your memory must be erased for all time. Rest in peace now, Jack, you and your twisted acolytes."
―The last exchange of words between Evie Frye and Jack the Ripper.[src]

Jack staged a reunion between the Frye twins at Lambeth Asylum, with the intention of killing Evie. He lured Evie to the site of his mother's murder and left her with clues and cues indicating his true location of the asylum. In preparation for her arrival, he killed prominent Lambeth Asylum staff who knew of his childhood confinement there, including his abusive nurse, a doctor and the asylum's director, and destroyed all records of his stay.

In addition, to slow Evie's approach, Jack released all of the asylum's inmates. While he held an advantage over Evie with his superior strength and aid from the inmates, Evie was able to catch Jack off-guard, and fatally wounded Jack with his own trademark dagger. Jack told Evie that she was no different than him before succumbing to his wounds, ending his reign of terror.

"You've turned an unknown miscreant into a legend—and that's exactly what he wants."
―Jacob Frye, regarding Jack's status as a legend, 1888.[src]

Following his defeat in late 1888, Jack's true identity, or even the fact that he had been killed, was never revealed by Inspector Frederick Abberline of the Metropolitan Police Service. This was done at the behest of Evie Frye in order to protect the Assassins from discovery and public backlash, due to Jack having been an Assassin himself.

"The killer is selective and dispassionate, and has left not a single trace of his passage."
―Inspector Frederick Abberline, on Jack the Ripper, 1888.[src]

The trauma of losing his mother and his subsequent incarceration at Lambeth Asylum had a lasting effect on Jack's mental stability. Jack's views on the Assassin Order quickly developed; he came to the conclusion that Jacob was responsible, however indirectly, for the death of his mother and the abuse he faced at Lambeth Asylum. He also began to develop a strong disdain for the Creed, considering a creed that could not protect its own to be a dead one.

He brutally murdered all opposition sent against him – Assassins commonly under the guise of local prostitutes – in order to send a message to the Frye twins. He was also meticulous in his plan to destroy all evidence of his existence and prior life, going so far as to do away with a number of Lambeth Asylum staff who might have had any living memory of him as well as documents pertaining to his incarceration at the asylum.

In spite of his actions against the London Assassins, Jack was careful not to compromise the Brotherhood; despite his lack of respect for the contemporary Creed, he did come to believe in his own idealized version of the philosophy and still saw the Order as a means to an end. While most of his victims managed to hide their Assassin rings before death, at least one had their finger forcibly removed postmortem in order to hide their connection to the Order. He also destroyed any evidence of his connection to the Assassins at Deptford after his plans there were foiled by Evie Frye.

Jack was also very vindictive and held deep, bitter grudges against those who he believed had wronged him. This was seen when he brutally massacred most if not all of the Lambeth Asylum's staff as revenge for the torment he underwent there.

"I have seen such talent for assassination and avoiding detection only once before... When I worked with the two of you."
―Inspector Frederick Abberline, on Jack the Ripper's talents, 1888.[src]

Jack was a highly skilled Assassin, having been well trained by his mentor, Jacob Frye, while still in his formative years. He possessed a vast skill-set, including armed and unarmed combat, stealth, public assassination techniques, proficiency in firearms and freerunning. By the time of the Whitechapel murders, he was capable of holding his own against and even overpowering the Frye twins, being well-nigh impervious to frontal attacks in the heat of battle. He also possessed an indomitable will, never giving up on the task at hand and approaching situations with utmost focus and care.

His repertoire also consisted of equipment and skills typically exclusive to the Assassins, such as the Hidden Blade, throwing knives, hallucinogenic darts, smoke bombs, the Victorian era rope launcher, and the rare sixth sense Eagle Vision. He could use his Eagle Vision to track down recently lost individuals or identify key targets.

Most notable of Jack's skills was his extremist use of the Indian Brotherhood's fear tactics. Rather than discretely dealing with targets, he would use excess brutality in public assassinations to instill fear in the hearts of London's populace. In combat, he would use fear bombs, spikes and jarring, psychotic screams to frighten and disrupt the composure of his opponents.

As an extension of his prowess for fear and intimidation, Jack also had a penchant for manipulation. Due to his collusion with Olwyn Owers, Jack's eyes and ears within London, his manipulations and influence spread rapidly across the city. His operations gradually began to reach well beyond the scope of prostitution, to kidnapping, extortion, and murder of the London elite.

Concept art of Jack the Ripper

Promotional art of Jack the Ripper

Promotional art of Jack the Ripper 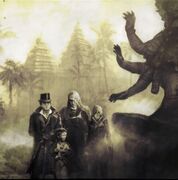 Retrieved from "https://assassinscreed.fandom.com/wiki/Jack_the_Ripper?oldid=669212"
Community content is available under CC-BY-SA unless otherwise noted.