"You weren't much of a friend, Jack Rackham. Nor an able sailor neither. But you were strange and lively, and you made me laugh more than once. And that's enough to make me sorry for seeing you like this. I hope you found a lasting peace, down there, among the dead."
―Edward Kenway to Rackham's gibbeted corpse, 1721.[src]

John "Jack" Rackham (1682 – 1720), more commonly known as Calico Jack, was a Jamaican-born British pirate who operated in the West Indies during the early 18th century. He was the captain of a schooner called the Royal Phoenix, prior to her destruction in 1718.

At some point, Rackham began serving as quartermaster under Charles Vane, though he grew to loathe his fellow pirate's hot temper and violent nature over the years. Supported by his crewmates, Rackham seized command in November 1718, deposing Vane as captain and setting him, along with Edward Kenway, adrift in a damaged sloop.

To the frustration of his crew, Rackham possessed limited aspirations as a pirate captain, and soon returned to Nassau to accept the King's pardon. There, he entered into a relationship with barmaid Anne Bonny, who convinced him to return to his previous life in August 1720.

Together with Mary Read, the duo escaped Nassau and plundered and pillaged for a few months, before being arrested by the British authorities. Tried and convicted of piracy, Rackham was executed in Port Royal on 18 November 1720.

In 1682, Jack Rackham was born in Port Royal, Jamaica, at the height of the town's debauched history. As such, Jack aged into a frequent drunk who was rarely serious about anything. It was during these early years that he developed an affinity for Indian and Asian prints, earning him his nickname.[1]

Eventually, the call of piracy proved too strong for Rackham to ignore and he became associated with Charles Vane, an English captain who had served as a privateer in the Royal Navy during the War of Spanish Succession.[2]

Life as a pirate

In 1717, both Charles Vane and Jack Rackham traveled to Nassau – home of the burgeoning Pirate Republic – to make their living. There they met several other pirates, including some of Vane's former privateering associates; Edward Kenway, Edward Thatch, and Benjamin Hornigold. Together, the two men informed the others of a huge ransom being held at a nearby fort by Cuban governor Laureano de Torres y Ayala, prompting Kenway to storm the fort and take the gold.[2]

A year later, in 1718 Jack became involved in a plot by Kenway and Vane to breach a British blockade of Nassau, set up after the Templar, Governor Woodes Rogers, had traveled to the city to reclaim it in the name of the British Crown. Rogers had previously offered the pirate captains and their crews amnesty, if they would give up their pirating and return to Britain; an offer both Vane and Rackham refused.[2]

Following their escape from Nassau, which came at the expense of Jack's ship, the Royal Phoenix, the three pirate captains agreed to pursue Kenway's fabled Observatory. They would start by locating a ship of the Royal African Company, which they hoped would lead them to the Princess, a slave ship carrying Bartholomew Roberts, the only man able to locate the Observatory.[2]

Eventually, they found and engaged the slave ship Royal African Pearl, but Vane's vessel was devastated in the battle and left adrift. Despite this, Kenway's Jackdaw was able to capture the warship, where they learned that the Princess sailed from Kingston every few months. At that moment, Rackham struck.[2]

In alliance with the Ranger's crew, Jack mutinied against Vane, apprehending him alongside Kenway and the Jackdaw's quartermaster, Adéwalé. Rackham remarked that he would sell Adéwalé in a local slave market, but that he could take no chances with Kenway or Vane, and so elected to strand them aboard the unseaworthy Ranger while he claimed the Jackdaw as his own.[2][1]

Barely two months had passed before Rackham limped back to Nassau to accept the King's pardon. Upon his arrival he was detained by James Kidd and Adéwalé, the man he had recently tried to sell into slavery. Not long thereafter, the three traveled to Kenway's manor on Great Inagua, where they returned control of the ship to the formerly marooned captain.[2]

Return to piracy, capture and death

Despite his actions, Jack was able to continue his life in Nassau. By 1720, he had become involved with Anne Bonny, a married woman who worked at the Old Avery tavern in the settlement. Before long, however, Anne's infidelity was discovered and Jack, unable to buy off Anne's spurned husband, elected to elope with her. Together with James Kidd, now openly acting as Mary Read, Anne and Jack left Nassau and returned to a career as pirates.[2][1]

At first they did well, capturing a number of small fishing vessels, but within four months of leaving Nassau they were attacked by the Royal Navy. With Jack and his crew passed out from drink, there stood only Anne Bonny, Mary Read and a third man to fight off the Royal Navy. Soon enough, the three were overrun and the vessel captured. Rackham, Bonny and Read were taken to Port Royal, and sentenced to hang for the crime of piracy.[2][1]

A few weeks after his sentencing, Jack was executed, and his body subsequently placed in a gibbet.[1] Several months later, Rackham's corpse was found by Edward during the latter's escape from the prison. The pirate mused that despite Jack's failings as both a sailor and a friend, he was still a strange and funny man who made him laugh and it dismayed him to see him in that state and he hoped Rackham had found some sort of peace in the afterlife.[2] 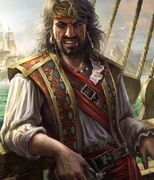 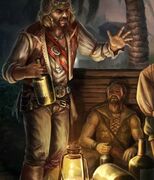 Memories art of Rackham along with other pirates

Rackham as he appears in Assassin's Creed: Pirates

A woodcut of Rackham

Rackham and Vane arriving in Nassau

Rackham being held captive by Mary Read and Edward Kenway