Jägers, also colloquially referred to as Hessians, were German mercenaries contracted by the British to fight on their behalf in the American Revolutionary War.

Disciplined and well trained in the woodlands of Southwestern Germany, Jägers specialized in deep forest and wilderness combat, tactics and reconnaissance, as well as unconventional warfare. As such, they were regarded as an elite scouting unit, used for surveying an area ahead of a body of troops or leading the way on the front lines.

The Jägers gained a fierce reputation as fearsome warriors and reliable, disciplined troops, and they were well respected within the ranks of the British Army. By and large, they operated independently of most British protocols.

There were two types of Jägers located in Colonial America during the American Revolutionary War.

During the American Revolutionary War, Jägers were the toughest enemies in that they could not be directly attacked, counter-attacked, or thrown. Whenever Connor attempted to do so, it would result in a parry or a retaliatory counter. The only known ways to kill them were to use the environment, lethal tools, using them as human shields, or through disarming them and repeatedly attacking the Jägers while they were vulnerable.

Jägers were not altogether common in the cities of Boston and New York; however, when Connor became notorious, they would comb the city, actively searching for him. As a guard archetype, Jägers were smarter and much more aggressive than plain British Regulars, and would employ advanced tactics and detection skills. Accompanying this, Jägers were highly agile and possessed faster running speed than Connor, while also having the ability to chase him across rooftops.

In terms of weaponry, Jägers were commonly seen using sabers and flintlock pistols, and would punch and lunge their weapons in close quarters, as well as attack from a distance. Usually, Jägers would attack in quick succession, of 3 to 4 thrusts, making it harder for them to be countered. They also carried some grenades, and would occasionally throw them during combat. Some soldiers would use muskets in battle. 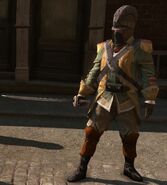 A Patriot Jäger
Add a photo to this gallery

Retrieved from "https://assassinscreed.fandom.com/wiki/J%C3%A4ger?oldid=817739"
Community content is available under CC-BY-SA unless otherwise noted.