Ivory refers to the mammalian tusks, teeth, and horns which have been considered a valuable sculpting material throughout human history.

Mostly poached from elephants, ivory has been widely used for jewelry and handles of weapons, in addition to sculptures.[1]

According to the Greek myth, the legendary founder of Elis, Pelops, received an ivory shoulder made by the god Hephaistos to replace the one unwittingly eaten by the goddess Demeter.[2]

In ancient Greece, the Athenian sculptor Phidias became famous for using chryselephantine, a combination of ivory and gold, to create exquisite statues, such as the Athena Parthenos, a statue of the goddess Athena within Parthenon,[3] and the Statue of the god Zeus within the Temple of Zeus in the Sanctuary of Olympia, Elis.[4]

The tusks of the wild boars around the Greek world were also considered to be ivory.[5]

Johannes Leo, the husband of Elizabeth Jane Weston, was noted for having an ivory-handled cane.[6]

During the so-called Golden Age of Piracy, ivory was familiar to the pirates like Edward Kenway.[7]

In the Victorian era, ivory was used occasionally in the crafting of weapons, namely in the butts of firearms and the handles of kukris and cane-swords .[8] 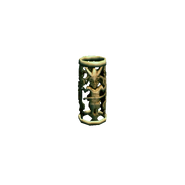 An ivory bracelet from 18th century

An ivory-handled kukri
Add a photo to this gallery

Retrieved from "https://assassinscreed.fandom.com/wiki/Ivory?oldid=874607"
Community content is available under CC-BY-SA unless otherwise noted.