House of Munsö
Sons of Ragnar

Ivarr the Boneless (died c. 873), also known as Ivarr Ragnarsson, was a Viking leader who raided Anglo-Saxon England during the 9th century.

The son of the legendary Ragnar Lothbrok, he was also the brother to Halfdan, Sigurd, Björn, and Ubba. During his time in England, Ivarr cut down four monarchs, making a name for himself as the "King Killer".

According to Icelandic sagas, Ivarr was born to the legendary Danish Viking raider Ragnar Lothbrok and his third wife, Aslaug.[2] In 865, Ragnar was killed by Ælla of Northumbria after being captured in a failed raid and thrown into an execution pit filled with venomous snakes.[3] Ivarr and his brothers, established Vikings by this time, vowed to avenge their father's death and invade England.[4]

The sons of Ragnar, including Ivarr, led the Great Heathen Army's invasion of England in 865. Around this time, Ivarr successfully avenged his father's death and killed Ælla by subjecting him to Ivarr's favored execution method, the blood eagle.[3][5] Following his personal victory, Ivarr claimed to have killed two additional lesser kings of the Heptarchy, Osberht of Northumbria[1] and Edmund of East Anglia,[6] earning him the reputation of "King Killer".[7] However, his role in Edmund's death could not be proven, as there were conflicting claims that Ubba had killed the king instead,[8] though Ubba never challenged Ivarr on his boasts.

In 873, Ivarr and Ubba, aided by the shieldmaiden Eivor Varinsdottir of the Raven Clan, orchestrated Ceolwulf II's rise to power in Mercia by attacking King Burgred's last stronghold of Tamworth Fortress. With its fall and Burgred's eventual capture, Ivarr successfully ousted him from the throne.[9] After Ceowulf's coronation, Ivarr took Ceolbert, the new king's eldest son, under his wing.[10]

As Ceobert's military advisor, Ivarr traveled with the young prince to Sciropescire. Ceolwulf had appointed his son as the future ealdorman of the region as a test of character, and so Ivarr was ordered to help broker a peace treaty with Rhodri the Great, a man with whom he had quarreled with many years prior. Rather than aid Ceobert in his efforts to secure a lasting peace, Ivarr killed Rhodri's brother Gwriad ap Merfyn during the parlay hosted by Bishop Deorlaf in the church, and so deliberately escalated the conflict.[7]

With tensions high, Ceolbert left to hunt wild boar, but when he failed to return, Eivor set out from camp to look for him. She soon found him mortally wounded in a wolf cave, with a Brittonic knife stuck in his chest. Eivor carried Ceolbert back to camp as quickly as she could, but had only just set the boy down in time for him to say his last words to Ivarr before he died from his wound. Enraged at his ward's death through the apparent duplicity of the Britons' peace talks, Ivarr used it as justification to lay siege to Rhodri's stronghold of Caustow Castle. After successfully incapacitating Rhodri in single combat during the attack,[11] he requested that Eivor bring the king to Manstone Rock and be witness to his execution by blood eagle ritual.[1]

Desiring a grand death to gain entry into Valhalla, Ivarr challenged Eivor to a holmgang. Though the Norse Viking was initially reluctant to cut down her former associate, Ivarr revealed that he had killed Ceobert in order to force the conflict. Enraged by his depravity, Eivor fought and defeated Ivarr in a grueling ritual combat, delivering a mortal wound and leaving him to bleed out shortly thereafter.[1]

Immediately after the duel, Eivor descended the peak with Ivarr's body to inform Ubba and Bishop Deorlaf of Ivarr's treachery and his passing. While Ubba was somewhat unsurprised at his brother's actions given his usual temperament, he still mourned Ivarr and arranged a floating funeral pyre to send him to Valhalla.[1]

During his years raiding in the British Isles, Ivarr gained the nickname "King Killer" after personally murdering a number of Britonic and Anglo-Saxon feudal lords. By the time of his death in 873, Ivarr had killed at least half a dozen noblemen, in addition to scores of soldiers.

Ivarr was crass, sadistic, and manipulative, taking genuine enjoyment in killing and hurting others. Unlike his brothers, he had no real desire to establish England as his home, viewing it as little more than his personal killing ground. He was obsessed with glory, hoping to eclipse all others in terms of kills and battlefield victories, and cared more about going to Valhalla than anything else.[12]

Ivarr the Boneless is a historical figure and character first introduced in the 2020 Echoes of History podcast episodes on Vikings, where he is voiced by British gaming YouTuber Alex Noon.[13] In mid-October 2020, Assassin's Creed: Valhalla's narrative director Darby McDevitt revealed on Twitter that Ivarr would appear in the game and be voiced by Eric Johnson.[14]

There are many theories as to how Ivarr got his moniker "the Boneless". Several of the sagas describe him as lacking legs or bones at all, having to be carried around on a shield by his men, while the Tale of Ragnar's Sons hints that he was impotent. In contrast to the game's depiction, the sagas portray Ivarr as being a reserved and calculating leader as opposed to a sadistic psychopath. In the game, Halfdan is stated to be older than Ivarr, while in the sagas, Ivarr is older.[15]

While some scholars believe Ivarr and Ímair of Ireland to be the same person, as noted by Shaun Hastings in Bárid mac Ímair's Database entry,[16] the game portrays them as separate individuals, possibly to distance the plot of the downloadable expansion Wrath of the Druids from that of the base game. 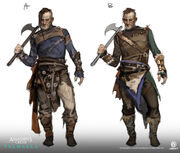