Video Summary: "While we prepare to synchronize, please listen to the following questions. Be sure to report any difficulties you have answering. What is your name? Where do you live? What year is it?

"We have a unique window into the lives and secrets of the infamous Borgia family. The DDS has recovered the memories of one of their trusted couriers, Perotto Calderon. Your task is to find out exactly what he discovered."

All Roads Lead to Rome 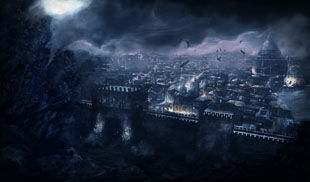 Lucrezia Borgia lives in the San Sisto convent while her father, Pope Alexander VI, plots her next marriage. They believe me to be a mere courier, but my true loyalty lies with their sworn enemy.

The Borgia are cruel and boastful! Though it pains me to eavesdrop upon their sadistic schemes and remain silent, I know this information will ultimately benefit my Brothers.

I spend a large portion of my time at the convent awaiting Lucrezia's replies for her father. I think she would prefer not to hear from him at all. She has sought refuge from his politics here, but I think we both know it will not last.

With access to the seal and security of Alexander's letters, I spend much time browsing through his private correspondence. Often, my Brothers ask me to doctor letters with the Pope's own handwriting and I am happy to oblige. 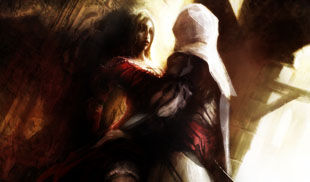 I am a fool! I have decided to follow my heart rather than my instructions, but I cannot sit idle while Lucrezia's family destroys her life! I do not believe mine can continue without her.

She Who Has Everything

Though I have seen the ornate gifts Lucrezia receives from her family's political allies, I feel that I must find something worthy of her beauty! I am a man of many resources, after all.

I have decided to make my move. I sense that Lucrezia has been waiting for me to do so, but if I am wrong... no, I must not think about that. I know I will continue to torture myself if I do not try.

Over the past few months, I have befriended Lucrezia's chambermaid, Giulia. My Brothers chose me for my ability to deceive, but she easily sees through my facade. She pushes me to make my move.

Finally, we are together! Neither of us believes it will last, that there is any way it could last, but for now it does not matter. We will try to hide from reality as long as we can. 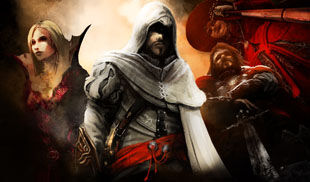 Lucrezia is pregnant! This is a complication we did not need! Meanwhile, our secrets have become much less secret; soon we will have both of our "families" to deal with. We struggle to stay afloat, but I fear we will soon be drowned.

As Lucrezia's belly grows, so does our danger. Disgusting rumors spread, but it seems safer to allow them than to implicate myself. I just hope they do not weigh heavily on my lady.

Fear has become fact! We have received a threat and a demand for bought silence. This man believes me to be a simple messenger. He will find he has made a fatal mistake!

In a way, I already have a child. His name is Francesco, one of the newest members of our Brotherhood. Though he is not yet a man, he is a promising understudy. He has been tasked with delivering my reports to our Order and his timing causes us serious concern. 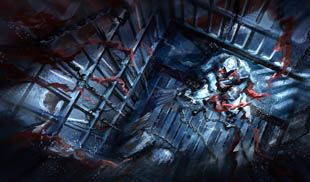 At this point, I cannot hope for my Brothers to rescue me, nor will I ever see Lucrezia again! My son still lives, but for how long? Just when my options seem to have run out, I receive a visitor. Giulia?

Speed is the Key

Giulia reveals a case full of Lucrezia's grooming tools, which include pins and files of various sizes. Clever! She knows more about me than I had believed! She apologizes for the lack of proper tools, but I assure her I can make them work.

The man in the cell next to me eagerly watches Giulia and I. He begs us to free him as well. At first, we ignore his pleas, but as he raises his voice, he becomes a threat! I trick him into nearing the bars and grab him!

Giulia's appearance was unexpected. I had nearly given up, but now I must find a way to ensure her safety, and beyond that, my son's. My Order has many secrets and I have uncovered one that, if true, may save his life. But at what price?

Giulia noticed several guards as she snuck into the dungeon, but they were relaxed and distracted — none of them saw her. To them, I am not a dangerous prisoner, but an ordinary messenger. Security will be light, but I do not expect to leave unchallenged!

My Order keeps an artifact in Agnadello, one with powers I cannot explain. If it can heal my child, I will travel any distance! I will need a horse, but I cannot return to the convent to retrieve my own. I pull a soldier from his saddle and challenge him for his mount! 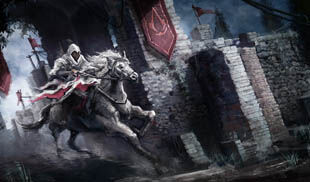 This is... disturbing. I've been following the progress of the other Abstergo recruits. Why are you tuning in to a new episode while they're stuck watching reruns? Where's the usual censorship? You must be really close to solving their little problem. Surely they know I'm watching, too! Tread carefully... - Erudito

I knew we were being chased, but I had hoped for more time! We have only made it as far as Firenze, but I will have to stop to plan an ambush. Alexander's men will be here soon! I leave my horse in an alcove and bring my son to hide in the forest, my bow ready.

My Brothers have travelled from Agnadello to greet me, swords drawn! They know why I am here. They will not allow me to use the Shroud! None shall stand in my way! 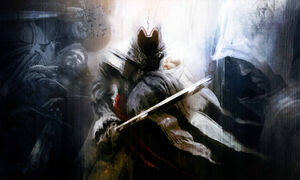 My enemies will come in greater numbers if my Brothers do not reach me first. I give my life for my son's, gambling everything upon a legend. Where I am empty in faith, I am filled with desperate hope.

So ... beautiful! It is a plain thing, carefully folded inside a simple wooden box, but it is also so much more! It speaks inside my head. I feel that it wants to heal my wounds. No! I am here for my son! I wrap his tiny body in the shroud. 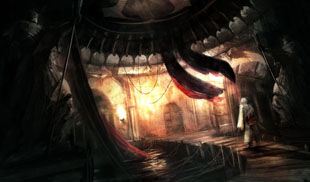 I have exhausted nearly every resource to lessen Perotto’s punishment for his crimes, but I fear there is little left I can do. We will hunt him tonight. Damn his foolishness... all this for a Borgia harlot?

I am torn! I own much to Perotto, who taught me how to act and speak like a man, though I am still younger than my Brothers. He taught me how to fight, how to live. How his betrayal stings! I feel I must defend him, but do I speak with a full heart?

We encounter a bloodied bunch of Alexander’s men, no doubt victims of Perotto. Sloppy work! He has left several alive and they continue to track him. If he leads them to Agnadello, we may lose the Shroud!

We have arrived at Agnadello, but we are too late! Perotto has left a brutal wake. We find bodies of our Brothers tucked indiscreetly into alleys and alcoves. How could he do this?

We approach Perotto's camp and find him ready. My Brothers are concerned about accidentally harming the baby, but I am more concerned about my teacher. Is there no way to save him? My question is answered as an arrow tears through my Brother beside me!