The Isu Armor was a technologically advanced suit of adamant plate armor created by the Isu. In Atlantis, the armor was worn by Isu who served as commanders in archives and military garrisons.

During the Peloponnesian War, the Spartan misthios Kassandra possibly obtained a complete set during her journey through Aletheia's simulation of Atlantis.[1]

Another suit was discovered in Ptolemaic Egypt four hundred years later and was worn by the cofounder of the Hidden Ones, the Medjay Bayek of Siwa, after visiting all the Stone Circles scattered throughout the kingdom.[2]

The knowledge gathered by Bayek during his pilgrimage allowed the Medjay to unlock the entrance of the Isu vault Eesfet Oon-m'Aa Poo beneath the Great Sphinx and retrieve the armor stored inside upon activating the ancient mechanism. Unlike many other examples of Isu-related armor sets, this one did not grant Bayek any additional capabilities whatsoever.[2]

In 2020, the Assassin Layla Hassan applied an Animus mod to create a usable simulation of a similar suit of winged armor while reliving the genetic memories of the Raven Clan Viking Eivor Varinsdottir during the Norse expansion into England. However, the wings were made of light and could not grant the wearer flight, thus were purely for aesthetic purposes.[3]

The Mythical Warrior outfit, a gold and silver version of the Isu armor with the mask covering only the top half of Bayek's face, can be unlocked after beating New Game Plus in Assassin's Creed: Origins. 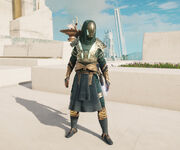