Isidora (died 38 BCE) was a High Priestess and God's Wife of Amun at the Temple of Karnak in Thebes during the reign of Cleopatra. She succeeded her mother Nitokris, who was murdered by tomb robbers after she tried to prevent them from ransacking the Necropolis of the Nobles.

In her childhood, Isidora's mother Nitokris served as the God's Wife of Amun in Karnak since at least 70 BCE. During her tenure, Nitokris made efforts to deter tomb robbers from ransacking the tombs of the pharaohs and nobles in the Valley of the Kings. However, Isidora later bore witness to her mother's murder by the tomb robbers in the Necropolis of the Nobles. With Nitokris' death, Isidora succeeded her as the God's Wife of Amun and later inherited an Apple of Eden kept by the priests in Karnak for many generations.[1]

With this, Isidora sought to take revenge against the tomb robbers by conjuring a "curse", in which the apparitions of deceased pharaohs were summoned to attack the living.[2]

Mastermind of the curse

Her actions, however, aroused the attention of the Hidden Ones' Mentor, Bayek of Siwa. The smuggler Merti referred him to Isidora at her shop near Luxor if he had any further questions before heading south to Yebu.[2]

Bayek's presence made her feel threatened when he told her that he killed two smugglers, Irsu and Tychon, so she attempted thrice to justify it to him as Amun's will. However, Bayek was not swayed, remembering when the Order of the Ancients used a similar relic that resulted in the death of his son.[2]

At some point after Bayek defeated the shades of Nefertiti and Akhenaten, Isidora confronted the historian Tahemet near the Necropolis of the Nobles, accusing her of treason for siding with the strategos of Yebu. However, Bayek arrived in time to prevent any further argument.[3]

After learning the truth from the fragments of wall carvings in the Necropolis, and from Tahemet's findings, he realized that Isidora had the relic all along and that she'd been lying to him. When Bayek tried to track her down in Karnak, Isidora already managed to make for the Tomb of Tutankhamun to complete the ritual that would restore Ma'at.[2]

Upon realizing this, he followed in hot pursuit and confronted her. He told her to give the Apple to him, and he did not want to kill her. Isidora refused, explaining to him that this was her duty and that it was why she watched her mother's murder to have the strength to carry it out. Bayek accused her of savagery and tried to stop her with his Hidden Blade, but was taken to the Duat and fought the apparition of Tutankhamun. Upon returning, he stabbed Isidora in the side.[2]

In her last moments, Isidora asked why Amun gave her the power only for her to fail. Bayek explained that Amun did not give her power, but a choice. He comforted her as she died, and granted her a Heron's Feather. Not much is known of what happened to her body afterwards.[2]

The name Isidora is Greek, meaning 'gift of Isis'.[4]

Historically, the God's Wife of Amun was traditionally selected from a daughter of the royal family, usually the wife or the mother of the Pharaoh. It is thus unclear as to whether Nitokris and Isidora are related to the royal family.[5] 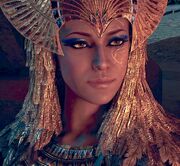