"Why can't this world be like a science experiment? All these lies and faked evidence. Why can't it be rational?!"
―Isaac Newton, 1696[src]

Sir Isaac Newton (1643 – 1727) was an English mathematician, astronomer, and physicist. He published several scientific breakthroughs, the most famous of which is Philosophiæ Naturalis Principia Mathematica[1][2] in 1687.[3] However he is also well known for his theories of motion and gravitation.

The Templar Order used and influenced his works to make science and technology flourish in society during the late 17th and early 18th century, so as to further the Order's goals.[4]

In the early 1690s, Newton worked alongside Nicolas Fatio de Duillier in Cambridge, where they researched on the Philosopher's stone. However, a disagreement and Newton's nervous breakdown caused a rift in the friendship, ending their partnership. In 1696, Newton returned to London to continue his work on the stone. He was appointed as warden of the Royal Mint and gained the acquaintance of the politician William Lowndes.[5] 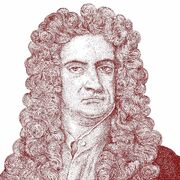 Isaac Newton in Who's In Your Blood?
Add a photo to this gallery

Retrieved from "https://assassinscreed.fandom.com/wiki/Isaac_Newton?oldid=864041"
Community content is available under CC-BY-SA unless otherwise noted.