Iron is a chemical element and one of the most common metals on Earth. Owing to its abundance, it has been widely used as a staple material for tools, weapons, armor, and as a building material by humanity throughout their history.

By the 5th century BCE, iron was the primary material used for forging weapons and armor in Greece.[1] Its usage in this capacity became nearly ubiquitous throughout the world and would remain so for millennia. From the spears and shotels of the Ptolemaic Egypt[2] to the pikes and the war hammers of the Italian Wars,[3], the tomahawks of the Kanien'kehá:ka to the Indian kukris, iron has been the most common and basic metal for human weapons for countless generations and civilizations.[4]

With the onset of the Industrial Revolution, the production of iron, alongside its derivative alloy steel, was dramatically upscaled; its role as a staple resource in construction and engineering spawned numerous factories such as the Ferris Ironworks in the British capital of London.[5]

The ubiquity of iron has lent it symbolic connotations for human societies, often those pertaining to qualities of stalwartness, defence, and fortitude. Two Phylakes in the employ of Ptolemy XIII, for instance, bore the aliases of the Iron Bull and the Iron Ram respectively.[2]

Apart from this, there is the legend of the Man in the Iron Mask, a prisoner in France during the reign of Louis XIV whose face was perpetually encased in the eponymous Iron Mask. The mystery of this prisoner whose identity was such a strictly guarded secret fascinated the public imagination and even sprung a cult that was active during the French Revolution.[6] 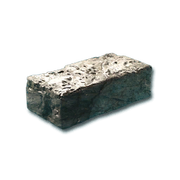 An iron ingot
Add a photo to this gallery

Retrieved from "https://assassinscreed.fandom.com/wiki/Iron?oldid=861243"
Community content is available under CC-BY-SA unless otherwise noted.