Assassin's Creed Wiki
Register
Don't have an account?
Sign In
Advertisement
in: Articles in need of sources, Iran, Countries in Asia, Middle East

Iran, also known by its historical exonym Persia, is a civilization and country at the centre of Asia. One of the oldest human civilizations in the world, Iran has historically been one of the most culturally influential powers thanks to its central position as a crossroads between Europe, the Middle East, India, and East Asia.

It rose to become a great empire in 550 BCE under the Achaemenid Empire founded by Cyrus the Great, conquering the Neo-Babylonian Empire which preceded it to extend its territorial control all across Western Asia to the Greek colonies in Anatolia, annexing even Egypt. In the reigns of Darius I and Xerxes I, Persia attempted twice to subdue the Greek poleis led by Athens and Sparta and failed, an event which would be a watershed moment in Greek history. Ultimately, the Achaemenid themselves fell to the empire of Alexander the Great in 330 BCE and were replaced as the next rulers of Western Asia, Greece, and Egypt.

This rivalry between Persia and Europe would repeat itself throughout the next millennium in the form of Greece's successor powers, the Roman Empire and the Byzantine Empire, while indigenous dynasties regained control of Persia. After Persia was overrun by the sudden Arab conquests in the 7th century, it was largely Islamized but managed to preserve its culture through the Arabs' adoption of much of their architecture, art, literature, and sociopolitical customs, especially during the reign of the Persianized, multi-ethnic Abbasid Caliphate. Significantly, the northern Persian mountains were the site of Alamut, the capital of the Assassin Brotherhood when they reorganized themselves as a public state under Hassan-i Sabbāh around 1090.

Nonetheless, the Persian homeland continued to be a perpetual battleground between rising empires, and it was conquered by the Turks in the 11h century then devastated by the Mongols in the 13th century. Persia recovered under the Safavid dynasty, a rival of the Ottoman Empire. In the 20th century, Iran became an ally of the Templars and the United States who helped the last Shah of the Pahlavi dynasty consolidate power, but this provoked a radical counter-reaction, the Iranian Revolution in 1979, which established a theocratic government, the Islamic Republic of Iran.

In the 5th century BCE, the Order of the Ancients was active in the Achaemenid Empire, helping King Darius I overthrow the imposter Gaumata,[4] and then aided his son Xerxes I in his invasion of Greece in 480 BCE.[5] A Persian proto-Assassin named Darius killed Xerxes in 465 BCE, which also marked the first recorded use of the Hidden Blade.[6][7]

The Order of the Ancients bequeathed a Staff of Eden to the Greek King Alexander of Macedon around 335 BCE, enabling him to seize the Persian Empire.[4]

During the 8th century, a Persian scholar by the name of Hammad Ar-Rawiya wrote the Mu'allaqat, a collection of pre-Islamic Arabic poems that he had memorized by heart.[8]

In the 9th century, the Hidden Ones had a firm presence in Persia, specifically in the fortress of Alamut. In 879, Fuladh was sent to host a council with his fellow Hidden Ones in the newly built fortress, inviting Rayhan and Hytham to attend, to provide a full account of the betrayal of Basim Ibn Ishaq.[9]

In the 10th century, a Persian poet named Ferdowsi wrote the "Shahnameh" ("The Book of Kings"), a monumental epic relating the history of Persia from the creation of the world until the Islamic conquest.[8]

By 1090, Hassan-i Sabbāh reorganized the Hidden Ones into the Assassin Brotherhood at Alamut.[4] In 1162, Hassan the Younger, the leader of the Levantine Brotherhood of Assassins, sent one of his subordinates, a man who would later be popularly known by his title of Al Mualim, from Alamut to establish the fortress of Masyaf in the An-Nusayriyah Mountains of Syria.[10] Altaïr Ibn-La'Ahad fled to Alamut with his family following his exile from Masyaf in 1227. During his time at Alamut, Altaïr discovered six Memory Seals beneath the fortress.[11]

In the 12th century, Attar of Nishapur, a travelling scholar and poet, returned to his native Persia to spread the knowledge he had obtained in his travels. Later, Attar fell victim to the seemingly unstoppable spread of the Mongol Empire. In April of 1221, the Mongols entered the Persian city of Nishapur and slaughtered everyone they came across.[12]

In 1739, the Iranian Shah, Nāder Shāh, acquired a Piece of Eden in the shape of a diamond when he sacked the Taj Mahal. In awe of its splendor, he named it the Koh-i-Noor (Mountain of Light).[13] In 1747, he was killed by the Persian Assassin Salah Bey, but not before the Koh-i-Noor fell into the hands of Ahmad Shāh Durrānī, an Afghan chief. Salah planned to pursue Ahmad in order to claim the Koh-i-Noor for the Brotherhood. However, the diamond remained in Ahmad's possession.[14]

Mohammad Reza Pahlavi was Shah of Iran from 1941 to 1979. In 1953, he allowed Abstergo Industries and the Central Intelligence Agency to overthrow Prime Minister Mohammad Mosaddegh to protect their oil interests. Four years later, they helped Pahlavi establish the SAVAK in order to goad his people into submission.[15] In 1979, the Pahlavi Monarchy was overthrown during the Iranian Revolution.

Persians aboard the Adrestia 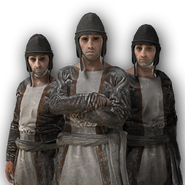 Icon of the crew skin