1499
Interruptions was an altered representation of a fragmented genetic memory.

Najma Alayza, a fellow Assassin from the Libyan Brotherhood, has made contact with us in Granada. We unfortunately disrupted an assassination she was carrying out in our attempt to save our allies from the Templars.

She has led is to a safe house she established while hunting her target, a man named Ubayd who we know to have once been among our number.

There is definitely more to her story than a simple assassination mission. We must speak with her and uncover the truth.

The Assassins and Najma met in the safe house.

The Assassins exited the safe house and made their way through the city, evading or eliminating any guards in their way, before meeting up in the empty lot behind a warehouse.

The Spanish Assassins escaped the compromised safe house. They later met up with Najma, who revealed to them that Ubayd was a former Assassin and her brother, and that his Templar handler was still holding Assassin allies in his villa in the city's north end.

Although every Helix Rift is ambiguous as to which Spanish Assassin is present in a scene given the game's character selection menu, a glitch in the Echoes Through the Animus memory "Egypt" confirms that one of characters here was Aguilar. 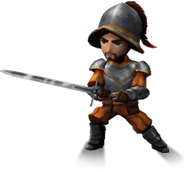