The Imperial District was one of the four major districts within Constantinople during the Renaissance. It was an area of towering marble buildings, majestic mosques and opulent citizenry. It is home to the Hagia Sophia.

In 2012, Abstergo Industries used the district as a virtual training map for their recruits during the second stage of the Animi Training Program.

The Imperial district, like most of the simulated locations in the primary and secondary stage, had two aesthetic variations. As such, it could be utilized at dawn or at dusk.

Hagia Sophia comparison, side to side

A street in Imperial district

A square in Imperial district 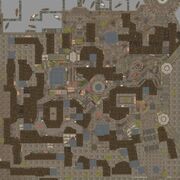