"If you are not wounded, you have not truly fought."
―Ii Naomasa.[src]

Ii Naomasa (Japanese: 井伊 直政; 1561 – 1602) was a general under the daimyo and shogun Tokugawa Ieyasu, regarded as one of the "Four Guardians" of the Tokugawa, along with Honda Tadakatsu, Sakakibara Yasumasa and Sakai Tadatsugu. He was a veteran of numerous battles, and was famous for continuing to fight even after sustaining severe injuries.

During the Battle of Sekigahara on 21 October 1600, Naomasa was critically wounded by a stray bullet fired by Shima Sakon's unit. Though Yamauchi Taka exacted revenge on Sakon on Naomasa's behalf, Naomasa eventually succumbed to his wounds. 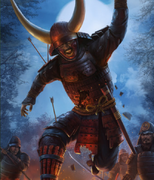