Hunwald (died 878) was an Anglo-Saxon nobleman who lived in Lincoln, Lincolnscire during the 9th century. He was the son of his shire's late ealdorman Hundbeorht and the last known member of his regal family line of Lindsey.

As a child, Hunwald grew up in Lincoln surrounded by his father and the family housekeeper, Raeganhere. As he grew up, Abbess Acha used to take care of him, like a surrogate mother, during his youth, as she taught him the scriptures of her God. Hunwald also grew up hunting with his father, but to no avail in finessing his skill with a bow. However, Hunwald always remembered that his father stated that he was proud of him, nonetheless. [2][3]

In 875, Hunwald arrived at the docks of the settlement, Ravensthorpe and asked for help from the Viking shieldmaiden Eivor Varinsdottir of the Raven Clan. Waiting at the docks, Hunwald was heard talking with two Norse members, Norvid and Svanhildr. When Eivor joined the conversation, Hunwald was asked by Eivor to state who he was. Hunwald told all present who he was, his father's illness, and his false exile from a secret order. When Eivor agreed to help, Hunwald was told to follow her lead. Hunwald understood and stated that he would wait in Botolphston for her to come.[4]

In Botolphston, Hunwald was in the village hall, where Eivor arrived to find Hunwald and thegn Aelfgar talking. When Eivor joined the conversation, a simple plan was discussed, in escorting Hunwald into Lincoln to meet his father and nothing more. However, their plans were disturbed by a pair of Saxon drinkers, who challenged Eivor to a match. During the brawl, Hunwald left to relieve himself outside. After the pair was dealt with, Hunwald was outside but surrounded by enemy Saxon soldiers. After Eivor defeated the soldiers, a dramatic Hunwald mistook this fight as a battle and a victory. Nevertheless, Hunwald was reminded to stay on track as him and Eivor agreed to a hasty leave for Lincoln.[4]

During the escort, Hunwald listed the possibilites of possible exile from the former king of Mercia, Burgred to King Aelfred of Wessex. The reason Hunwald believed may be due to his relationship with a Dane woman. Upon their arrival, Hunwald and Eivor noticed Lincoln was heavily guarded and made sure to travel to Hunwald's home as quick as possible. Along their sleuthing, Hunwald recounted to Eivor that his father was very ill and how he wished to see his father soon. Finding and entering his home, Hunwald, with Eivor, saw and met with the housekeeper, Raeganhere. Hunwald soon declared to see his father. However, Hunwald was told by Raeganhere that his father's health made him be moved near the sisters and the abbess Acha and that Bishop Herefrith took over the shire's duties.[2]

Hunwald and Eivor headed towards the town hall to find the bishop and abbess talking. The abbess was pleased to see Hunwald alive while the bishop remained stagnant and dismissive of Hunwald. Hunwald was scolded by Herefrith of the rumors of Hunwald spending time bedding a Dane. Hunwald responded by stating that he wanted to see his father and that Eivor was aiding him in terms of protection. However, Hunwald was told that the ealdorman left himself in his ill state and do not know where he went ultimately. Out of options, Hunwald was told by Eivor that she investigate his father's disapperance. Hunwald disclosed that Eivor may need to look at the hospice and ask those who have seen him last in Lincoln.[2]

After Eivor's investigation, back at Lincoln's town hall, a conversation between Hunwald, Aelfgar, Acha, and Herefrith was held until Eivor's arrival. Hunwald cried immensely once Eivor relayed that his father passed, while Acha tried to console him. Hunwald kept crying as Acha told the truth that she knew that Hunwald's father was near death and performed last rites. Hunwald yelled at her and ran out, as Acha tried to follow him. This development led to the nominations of Hunwald, Aelfgar, and Herefrith presumably to become the new ealdorman. However, Hunwald had to be found and safe as his enemies may see an opening to kill him.[5]

Hunwald went down the Roman road and traveled to a old tall tree that he used to go to with his father. At the Ealdorman's Overlook, Hunwald talked aloud to his late father about their hunting ventures, while Eivor found him. At the tree, an engraving was found on it: Hunwald and Swanburrow. Speaking to Eivor, Hunwald was consoled over the loss of his father and both started to drink over their sorrows. Drunk, Hunwald and Eivor talk about his supposed Dane ladylove and Hunwald insisted to go to Grimsby to see her. Still drunk, Hunwald and Eivor talked about how Hunwald may be ealdorman and Hunwald proclaimed to want a chance to be their leader.[3]

Along the road, Hunwald was told to be quiet as Eivor heard a noise. Soon, a collective of Saxon soldiers waited in ambush, until Eivor and Hunwald were soon attacked. However, the pair survived and defeated their attackers. Hunwald made sure to keep going as he believed his love, Swanburrow, was also in danger as well. On foot, they ran to Grimsby and saw a woman praying to an Odin statue on a top of a hill. Hunwald saw Swanburrow, worried, and they both quickly embraced each other after a long period apart. After brief introductions between Eivor and Swanburrow, Hunwald and Eivor recounted the past ambush and his father's death. Upon Eivor's word, Hunwald agreed to stay with Swanburrow until the moot.[3]

During the Shiremoot, a tie occurred between Hunwald, Aelfgar, and Herefrith, each with four votes, with Eivor as the deciding vote. Hunwald spoke to Eivor and stated that he would rise above the mediocrity that had befallen him and that he would be a righteous leader. After Eivor put her vote forward, the shire finally had a new leader as Hunwald, Aelfgar, and Herefrith were accepted the results.[6]

After the moot, a sudden change happened in Lincolnscire as Bishop Herefrith declared war against Hunwald, Aelfgar, and the people of Lincolnshire. Hunwald and Aelfgar prepared a siege at Anecastre, as Eivor arrived to help. Hunwald was admittingly shocked as he recalled the bishop and his father to be the best of friends. Hunwald, Aelfgar, and Eivor talked to the captain and decided their plan of action. After the planning, the siege began. Hunwald, Eivor, and Aelfgar fought their way through Herefrith's defenses and made it through the barriers, one by one. Soon, they reached the final barrier and caught sight of a priest kneeling in surrender. From the priest's information, Herefrith was holed up inside the chapel nearby, as Hunwald and Aelfgar were told by Eivor to make sure no one left the chapel unanswered.[7]

After Herefrith's death at Eivor's hands, the siege ended with a victory for Hunwald, Eivor, and Aelfgar and the safety of Lincolnshire. Afterwards, Hunwald and Eivor talked about the future of the shire and the next steps in his life. Thus, Hunwald asked Eivor for a favor, which was to have his love, Swanburrow, kept safe within Eivor's community, and Eivor agreed to house and care for Swanburrow. Coming to an understanding, Hunwald hugged Eivor and found to have made a friend within Eivor and promised an alliance with her.[7]

In 878, Hunwald was called to fight against King Alfred in the battle of Cippanhamm. Hunwald was seen in a conversation between himself, Vili Hemmingson, and Eluric, as Vili glorified his battle woes and experiences to the young warriors. When Eivor gave a speech to her allies, Hunwald was in attendance and cheered for Eivor.[1]

Upon Ljufvina Bjarmarsdottir and Hjorr Halfsson's call for Eivor, it was stated that one of the "Saxon boys" were wounded. Hunwald was shown to be badly hurt as Eluric was in dismay of not protecting Hunwald. Hunwald was carried to a nearby farmhouse and laid down. As Eluric and Eivor was at his side, Hunwald talked about him meeting his father and proving himself worthy. Hunwald stated that Eivor was his truest friend before succumbing to his wounds. Hunwald's body was protected by Eluric as a bereft, whimpering Eivor left to finish the battle. After the battle was won, Hunwald's body was brought and laid down besides Soma's body and Hjorr's body. In response to their deaths, funeral rites were prepared for all of the fallen allies and friends.[1]

After the battle, Hunwald's death was delivered to Swanburrow back at Ravensthorpe. As Eivor consoled Swanburrow, it was remarked by Eivor about how Hunwald fought bravely, died a hero, and now walked among warriors. It was also acknowledged that the settlement was here for Swanburrow anytime.[8] Hunwald was given a burial in Ravensthorpe, alongside the burials of Svend and Dag Nithisson.

If Eivor chose Hunwald or Aelfgar as ealdorman, bishop Herefrith would reveal himself as The Crozier of the Order at the moot and ambush everyone inside. Thus, Hunwald would fight alongside the nobles of the shire against Herefrith's guards. If Eivor instead chose Aelfgar or Herefrith as ealdorman initially, after killing the bishop, Hunwald asked for both him and Swanburrow to live with Eivor and her clan. Eivor would agree and the couple would have their own house in the settlement. However, if Hunwald is ealdorman, Swanburrow lives with the Raven Clan solely, as per Hunwald's favor to keep her safe from any future attacks.

If players started the free Oskoreia Season event before completing the memory "Holy Day", they can find Hunwald's name and a one-line memorial carved into the decorated longship in Ravensthorpe commemorating the deceased, as his death in unavoidable in the main storyline. 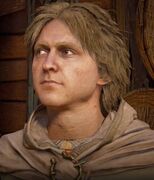 Eivor and her allies readied for battle