The Huntsman (harvested from: William de Saint-Prix) was an Animi Avatar used by the entertainment branch of Abstergo Industries, as part of their plan to influence the general public, via the console stage of the Animus technology. He used a wrought iron claw as his specialty weapon, utilized alongside his invented fighting style.

Approaching his target, the Huntsman grabs his iron claw, before swinging it in a downwards arc and piercing it into their left shoulder. As the weapon lodges itself into his victim, he kicks their left knee from underneath them, sending them spinning onto their back as his claw rips a savage wound when it frees itself with the momentum.

Casually walking over to his target from behind, the Huntsman draws his iron claw, before reaching around and stabbing it into their neck. As they stand vulnerable from the blow, he closes the distance and grasps their shoulder, before the Huntsman twists his victim and wrenches his weapon sharply to the right, slitting their throat and spinning them, where they stumble and fall to their death.

Hastily closing the distance between himself and his target, the Huntsman pierces his iron claw under their chin and pulls them forward, before rolling over their back and dragging them from their feet. As his victim is yanked into a barrel roll by his weapon, the claw slices though their neck while the Huntsman lands on his feet, leaving them to crash into the ground where they die of blood loss.

Rushing over to his target from the rear, the Huntsman takes his iron claw in his right hand and grabs their arm with his left one. Following this, he stabs his weapon into the side of their neck, before dragging his victim around and flipping them over his claw, cruelly slashing through their throat with the momentum.

Forgoing stealth, the Huntsman hastily stabs his iron claw into his target's neck, paralyzing them. Wasting no time, he turns around and grabs their right arm with his left. He then bends over, flipping his victim over his back and sending them crashing towards the ground, leaving them to die from their wound.

Pouncing on his target from above, the Huntsman takes his iron claw from his waist and raises it above his head, before keenly swinging it down into their neck as he collides with them. As their body breaks his fall, he rips his weapon out of his victim, before storing it back on its holster and walking away from the grisly scene.

The Huntsman grabs his seated target's foot and drags them off the bench, until their head rests against it. Before his victim can do anything to defend themselves, the Huntsman forcefully kicks them in the face, violently sending their head backwards and breaking their neck on the bench behind them.

The Huntsman could be customized in several ways:

Concept art of the Huntsman

Alternative concept art of the Huntsman

Customization concepts of the Huntsman 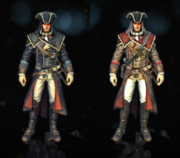 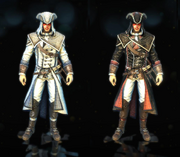 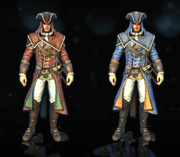 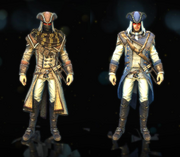 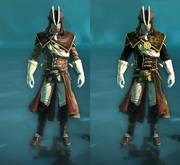 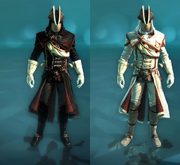 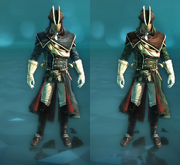 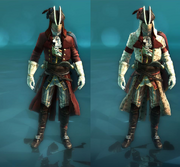 AC4 - Law of Talion and Prestige Costumes for Huntsman 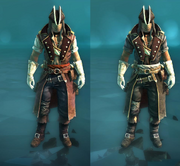 AC4 - French Flair and Man in Black Costumes for Huntsman 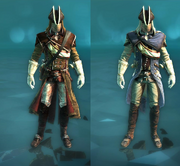 The Huntsman chasing the Pioneer

Huntsman capturing an area in Domination

The Huntsman using throwing knives to slow down the Independent

The Huntsman working together with the Bear, the Lady Maverick and the Preacher in Wolfpack

The Huntsman being chased by the Pioneer

Retrieved from "https://assassinscreed.fandom.com/wiki/Huntsman?oldid=831088"
Community content is available under CC-BY-SA unless otherwise noted.