The Assassination of Jean-Paul Marat
The Hand of Science

Hot Chocolate to Die For

Hot Chocolate to Die For was a virtual representation of one of Arno Dorian's genetic memories, relived by a Helix initiate through the Helix Navigator.

"My son, I write to caution and admonish you as to your conduct. I appreciate that since the death of your father, you have enjoyed considerable financial freedom due to his foolishly generous bequest as regards yourself (whereas I have had to made do with a pittance). Your Aunt Amélie recently discovered a document that makes it quite clear that it is I that should have obtained control of my family's fortune upon the death of your father, despite the ludicrous claims of our doddering "executor" who squanders our money in his foolish business dealings in the Orient.
You simply must quell your extravagances--especially in regards to the vulture-liked women you consort with--in view of the fact that I will shortly obtain control of the entire inheritance. Whatever debts you have incurred will thereupon be yours and yours only.
Don't delude yourself that Amélie will come to your rescue, despite the fact that you have been foolishly generous to her. The money comes to me. She will have a small maintenance and can continue to wear Mother's worthless jewelry. She does not understand the value of money, and the less of it the better for her."

A page is marked detailing the La Voisin poisonings of the previous century. It seems one Catherine Deshayes la Voisin and her daughter, Marguerite Monvoisin were involved.

"I obtained this recipe from my close friend who in turn obtained it from a relation, whom is reputed to have received it from a certain Italian gentleman, proving its authenticity. It produces a liquid devoid of color, smell or taste that demonstrates the desired result within mere minutes. Many have sought the secret I am about to divulge. Guard it well."

The passage continues with an involved process in which arsenic, belladonna leaves and lead powder are reduced to form a clear, odorless liquid. There are marginal notes made in several hands in faded ink.

I myself was witness to the signing of your late husband's last will and testament only a few months before his death. He left the sum to be managed by his friend Georges Villiers-Segonzac, with the bulk of the estate to go to your son, Pierre. We discussed the matter over cognac, and he seemed most reasonable.
Madam, I would thank you to not call into question my thoroughness and professionalism. Neither your husband nor M. Villiers-Segonzac disclosed the document you have brought to light. I prefer to think they were unaware of its existence.
Regardless, the document appears to be genuine and gives you an undisputable claim to the assets. There is, however, one obstacle to your stated desire to take immediate and direct control of the inheritance: the law dictates that women may not manage their own financial affairs. Therefore, M. Georges Villiers-Segonzac continues to hold complete authority over the entire fortune despite the fact that the assets have always belonged directly to you and never to your husband. As long as M. Villiers-Segonzac is active, your husband's will dictates that he, and not yourself, stands as the one who controls the fortune.

Please accept my most sincere regrets and esteem,
-- Maxime Siquotie

My mother, through her business, amassed a considerable personal fortune before her death, which she left entirely to me, her eldest daughter. To honor her, I declare a legacy to be passed to the eldest surviving female of my line born of the name Monvoisin.
My wealth is held in trust, with the income benefitting my heir directly. As one heir dies, it passes to her eldest daughter or, if none, her eldest siser or, if none, her eldest female relation.
In addition, the heir must take ownership of my mother's commonplace book and her collection of glass rings and necklaces, the judicious use of which is essential to the success of the enterprise. Indeed what these items represent is more powerful than any wealth.
I declare these to be my wishes upon my death.
- Marguerite Monvoisin.
Belle-Ile-en-Mer, 1692 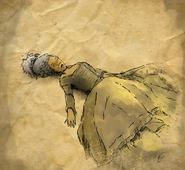 The body of Valérie Duclos found in the courtyard. 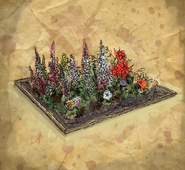 The flower garden in the courtyard. 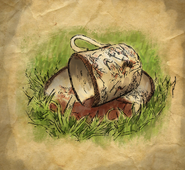 The overturned cup of hot chocolate. 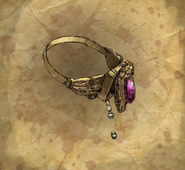 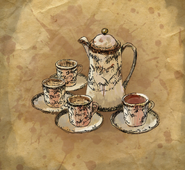 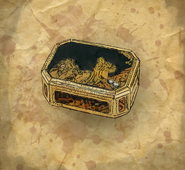 The snuffbox inscribed with the name G. Villiers-Segonzac.
Add a photo to this gallery

Retrieved from "https://assassinscreed.fandom.com/wiki/Hot_Chocolate_to_Die_For?oldid=789872"
Community content is available under CC-BY-SA unless otherwise noted.