"That is Horus, the Falcon. the Great Black One. God of the sky. The sun is his right eye and the moon is his left eye. Forever he flies across the heavens, making night and day."
―Bayek, describing Horus' constellation to his son Khemu[src]-[m]

Horus was an Isu and the son of Osiris and Isis.[1] Later revered as an Egyptian god of the sky and as the protector of the rulers of Egypt.[2] He is described as having the head of a blue hawk, and as such is symbolized as one.[3]

When Osiris was murdered by his brother Seth, Isis used the Ankh to revive him, but it only brought Osiris back for one night. Using the opportunity, they consummated their love that night, leading to the conception of Horus.[1]

Through Isis, Horus was became a father to Imsety, Hapi, Duamutef, and Kebehsenuef.[4]

Using the interpretatio graeca, a discourse used to interpret or attempt to understand the mythology and religion of other cultures, the ancient Greeks identified Horus as the god Apollo, but also identified him as Zeus.[5]

Within the simulation of Atlantis, the Spartan misthios Kassandra visited an archive dedicated to Horus in the Oikos of Atlantis.[6]

Horus had a temple in Letopolis dedicated to him and his worship. Bayek visited this temple during 48 BCE and found a papyrus puzzle.[7]

His insignia, the Eye of Horus, was used by the Medjay as a mark of office.[8] The Eye of Horus was later incorporated into the emblem of the Hidden Ones once the organization was co-founded by the former Medjay Bayek of Siwa and his wife, Aya of Alexandria.[9] A Stone Circle was also designated to Horus in Uab Nome, which was explored by Bayek sometime in 48 BCE.[10]

Around 38 BCE, Bayek entered a portal illusion and found himself in Aten, where he met the elderly Khui and helped preserve the man's fading memory of Horus, among other deities, by retrieving Khui's statuette of the god.[11]

In Anglo-Saxon England during the 9th century CE, the Viking shieldmaiden Eivor Varinsdottir of the Raven Clan recovered a letter written in Demotic by Bayek from the travelling merchant Reda. In it, Bayek compared his wife Amunet to "[his] Iset" as he was "[her] Osiris", before continuing the analogy and wishing that their "Horus" of the Hidden Ones would live on long after their passing.[12]

In the middle ages, Levantine Assassin Mentor Altaïr Ibn-La'Ahad noted in his codex the similarities between Horus and figures of other belief systems such as Jesus of Nazareth, Mithra, and Dionysos. He postulated that these stories shared a common source.[13] 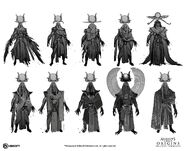 A statue of Horus in Thebes