"God, Hope... What are you doing with these felons? Turning the city against itself? What have you become?"
―Shay Cormac, 1756.[src]

Hope Jensen (1732 – 1759) was a member of the Colonial Brotherhood of Assassins operating in North America during the Seven Years' War. Mentored by Achilles Davenport, she controlled much of New York's organized crime, providing her with an effective information network.

Born in New York to a modest family, Hope was placed in an orphanage after the death of her parents. She was subsequently adopted by a German couple, who hoped to build a new life for themselves in the colonies. They symbolized this desire by naming their newly-adopted daughter Hope. Although it took several years, the Jensens eventually grew wealthy, the business endeavors of Hope's father turning great profits, and began to mix with New York's finer circles. However, despite their best efforts to fit in, they were never truly accepted by the city's elite.

Growing up, Hope was taught by private tutors and gradually realized the injustice rampant in the world. In 1742, her father disappeared under mysterious circumstances and was never found again, following which her father's former business partners took control of the family business. Left with nothing, Hope and her mother were forced to live on the streets.

Eventually, Hope's mother fell ill, her health slowly deteriorating, despite her daughter's best efforts at stealing food and medicines. With the passing of her mother, Hope hardened, vowing never to depend on anyone again.

"Remember what I taught you. Be patient. Be silent. Never let them see you coming."
―Hope offering advice to Shay after one of her lessons, 1752.[src]

In 1746, Hope met Achilles Davenport, who was impressed by her survival instincts, pickpocketing skills and strength of will. She was officially inducted into the Assassin Brotherhood a year later. Tasked with setting up a network in New York, Hope soon controlled most of the city's organized crime, with her gangs taking control of each district. She also possessed her own mansion, which served as her base of operations.

Due to her experience, she also served as one of Shay Cormac's instructors, tutoring him in various assassination and stealth techniques. However, she found him to be a troublesome student, largely due to his frequent tardiness and lack of discipline, which she felt prevented him from achieving his full potential.

In March 1752, news reached the Colonial Brotherhood that the Templars had stolen two valuable Pieces of Eden during an earthquake in Haiti. Like her compatriots, Hope focused her efforts on locating these lost relics. While she discovered that the Templars had consulted many learned people in New York, in an attempt to understand the purpose of the First Civilization artifacts, she was unable to find out where they were.

After Shay eliminated high-ranking Templar Lawrence Washington in July, Hope and the others turned their attention to Samuel Smith and James Wardrop, who respectively had the Precursor box and Manuscript in their possession. Following the assassination of Smith in May 1754, Hope learned that Wardrop would be at a congress in Albany. There, she met up with Shay and Liam, agreeing to serve as back-up with the latter while the former pursued Wardrop.

With the Precursor box and Manuscript retrieved, Hope and Shay sought to secure Benjamin Franklin's assistance, hoping that he could activate the artifact. Pretending to be associates of the Templar William Johnson, the pair learned that Franklin was unable to carry out his experiment, as his lightning rods had been confiscated. While Shay went to retrieve the rods, Hope stayed with Franklin to help prepare.

Following Shay's return, Franklin conducted his experiment, using the lightning rods to direct electricity into the Precursor box. Upon a third lightning strike, the artifact activated, briefly projecting a map that revealed the locations of several Precursor sites. Shay recognized one of the places shown, before fleeing the scene, while Hope masqueraded as Franklin's housekeeper to avoid suspicion from the soon-to-arrive guards.

Later, Hope and Shay reunited at the Assassin bureau in Two Bends to discuss the information learned with Achilles. Due to his knowledge of the site, which was located in Lisbon, Shay was tasked with the retrieval of the Piece of Eden. As the Morrigan was unfit for crossing the Atlantic Ocean, Hope kept the ship safe in New York while her student was away.

Hope: "Shay, a person cannot start an earthquake."
Shay: "A person meddling with these Precursor machines could. You saw the Box, Hope. The Temple was filled to bursting with that kind of power."
―Shay arguing with Hope upon his return from Lisbon.[src]

However, Shay's efforts to acquire the Piece of Eden ended up triggering a massive earthquake that leveled nearly the entire city, causing thousands of people to lose their lives. Guilt-ridden and blaming Achilles, he lashed out at his Mentor, with whom Hope sided, upon his return. She defended her Mentor against her student's accusations and, together with Liam, forced him out of the room. Their refusal to hear him out only fueled Shay's belief that the Assassins could not find any more Precursor sites, leading him to steal the Manuscript.

Achilles discovered Shay and ordered his Assassins, Hope among them, to catch the deserter and retrieve the stolen artifact. She subsequently attempted to halt Shay's escape by throwing smoke bombs in his path, all the while questioning his reasoning, but did not succeed in deterring him. She and her fellow Assassins eventually cornered Shay at a cliff overlooking the bay, where Hope once more tried to convince her former student to return the Manuscript.

However, Shay refused to listen, claiming he could not allow such a disaster again, and prepared to walk off the edge. Chevalier de la Vérendrye then shot Shay in an attempt to stop him, but failed, with Shay plunging into the bay and subsequently being carried out by the tide; the Assassins assumed him dead and the Manuscript destroyed.

"The ruffians we have arrested refer to an intimidating woman. I believe she is behind these nefarious plans."
―George Monro on Hope's activities, 1756.[src]

Following the events at the Homestead, Hope continued her work with Franklin alone. She had him produce equipment for her that could be used in conjunction with the Assassins' poison gas reserves, which were supplied by Le Chasseur. Among the weaponry commissioned was the prototype of a grenade launcher, though this particular weapon ended up in the hands of the Templars when Franklin handed it over to Shay, unaware of the latter's switch in allegiance.

Believing Hope would use the poisonous gas on the innocent populace of New York, the Templars sent Shay to destroy a factory that housed a large supply of it, further sabotaging the Assassin's activities. He also worked to weaken the presence of Hope's gangs throughout the years.

In November 1757, Liam managed to steal back the lost Manuscript from the Templar George Monro, allowing the Assassins to continue their search for the Precursor temples. For a long time, however, they were unable to replicate Franklin's original experiment, preventing them from determining an exact location and organizing an expedition.

By October 1759, Hope had figured out a way to activate the Precursor Box once more and find the location of another Temple. While she set up the experiment inside her warehouse, the British Army, having been manipulated by the Templars, launched an attack on her mansion with the intent of eradicating the gangs' influence. Unfazed, Hope managed to activate the artifact and give Liam the location of a Temple, before sending him on his way.

Immediately afterwards, she shot out the skylight, causing Shay, who had been spying on her, to fall down into the warehouse. Hope then took his gas mask, drank an antidote and activated a mechanism, causing the chamber to slowly fill with toxic gasses. Leaving Shay to die inside, she was surprised when soon after, he appeared on the warehouse's balcony.

Complimenting him on his endurance, Hope then flung a poison dart at him, before departing once again, though Shay nevertheless continued to pursue her. She attempted to deter him by using various smoke bombs, hoping the poison would run its course before he could catch up to her. However, after a lengthy chase across New York, Shay managed to stab Hope in the abdomen, mortally wounding her.

Having taken her antidote, Shay cured himself of Hope's poison, before expressing remorse at having to kill her. Hope dismissed these words and revealed she had merely been buying time for the Assassins' expedition. She lamented Shay's wasted potential, before succumbing to her wounds; her body would later be found by Liam.

Hope appeared to be responsible and extremely powerful for her young age. Despite her high ranking position within the Brotherhood, she was friendly towards her pupils. However, While she was fond of Shay Cormac and believing he "had potential", she hated he never put his talents to full use. Some of her interactions with Shay could also hint a romantic interest.

She could also be cunning, shrewd, and calculating, able to formulate an efficient plan in a brief period of time and apply it with efficiency.

From an early age, Hope lived on the streets and was forced to pickpocket. She was so good that she impressed Achilles with her skill. Hope proved to be a skilled Assassin, and later on she began to tutor recruits in stealth and swordsmanship. She was also a skilled freerunner and capable of performing a Leap of Faith.

In terms of equipment, Hope was armed with at least one Hidden Blade, smoke bombs, a sword and a pair of flintlock pistols. As well as this she appeared to have some kind of a poison dart.

Shay and Hope attempting to speak with Franklin

Hope examining the map projected by the box

Hope meeting with the Assassins in New York 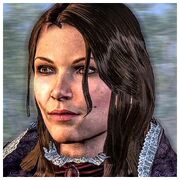 Database render of Hope
Add a photo to this gallery

Retrieved from "https://assassinscreed.fandom.com/wiki/Hope_Jensen?oldid=856952"
Community content is available under CC-BY-SA unless otherwise noted.