Honey is a sweet a substance produced by bees and other similar insects.

In ancient Greece, honey was considered a 'gift from gods', as its origins were not fully understood despite beekeeping being a part of the daily life of Greeks ever since the Minoan times.[1] Due to its mystery, honey was considered a kind of a panacea and was widely used as medicine.[1] The Greek goddess Hygieia was also considered to have such a presence that "all venom turns to sweet honey" within her sight.[2]

Numerous poets, including Hesiod, Homer, and Virgil mention honey and bees, beehives in their works, with Virgil even going as far as dedicating an ode to beekeeping in his Georgics.[1]

Honey was greatly valuee and could be used as currency while trading, or when paying tributes, like Korsika did to Etruscans.[1]

During the Peloponnesian War, Mount Hymettos in Attika, Greece was known for its honey as well as its marble.[3]

As a side product of honey, beeswax was also used. In myths, Odysseus was said to have ordered his men to put beeswax in their ears to prevent their deaths by the song of the sirens.[4] This trick was also suggested by Barnabas to the Spartan misthios Kassandra during the Peloponnesian War, when their search for Barnabas' wife, Leda, seemed to take them to a lair of the sirens.[5]

In the 1st century BCE Egypt, the village of Kerke in Atef-Pehu Nome was famous for its honey farms, but the Udjat Apiary excelled in it.[2]

Due to the observed 'supernatural' nature of honey, it left its mark in the mythology of Greece as well. A nymph named Melissa was said to have been the very first to discover and harvest honey. When the Titan Rhea hid her son Zeus from his father Kronos on Mount Ida in Messara, Krete, Melissa took care of the infant together with her sister Adrasteia. Melissa was also connected with the goddess Demeter, into whose mysteries she was inducted.[6]

Due to the nymph, priestesses of mystery cults in the Greek world were often called Melissai, and honey was a valued offering to make to the gods.[6]

In Greek, Μέλισσᾰ (mélissa) is the word for "(honey) bee", and poetically used for honey itself; it is derived from the Greek word [1] (méli), meaning 'honey, sweet'.

In Assassin's Creed: Odyssey, myths about a woman named Melissa have been conflated with the nymph being also the priestess of Demeter.[6]

Periander, the tyrant of Korinth, called his wife Lyside 'Melissa'. In Assassin's Creed: Odyssey this is acknowledged via a monument for her located in Hera's Watch in Argolis, Greece.[7]

A jar of honey in ancient Greece 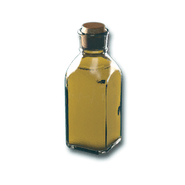 Retrieved from "https://assassinscreed.fandom.com/wiki/Honey?oldid=886912"
Community content is available under CC-BY-SA unless otherwise noted.