"Bloody" Hiram Stoddard, was a ruthless British Assassin active during the 16th century who was also a close ancestor to Thomas Stoddard.

Seemingly a cheerful joker, Hiram became violent when angered. After his lover Elena died in front of him, the broken Englishman suppressed the memory and abandoned the Brotherhood to seek out the woman he remembered as having left him due to his temper, earning his "Bloody" moniker in the process.

In 2016, his descendant, Charlotte de la Cruz, relived his memories in order to learn more about Consus.

By 1515, the young Hiram was in Italy, training under the tutelage of Ezio Auditore da Firenze alongside another young Assassin named Giovanni Borgia. The latter despised Hiram, jealous of his skills and likable demeanor which earned to the young Englishman the praise of Ezio and the love of the beautiful Elena. A rivalry developed between the young Assassins, which culminated during a mission led by Hiram to recover an Apple of Eden.

As intructed by their master, the two apprentices traveled to Florence to meet with Ezio's informant, Michelangelo, with whom they planned an ambush on Dei Petrucci, the Templar carrying the artifact. Jumping from the roof of Florence Cathedral, the Assassins swiftly killed Petrucci's guards but distracted by the last one of them Hiram was unable to prevent their prey to flee with the Apple.

A couple of days later, while they were in a tavern after unsuccessfully looking for a lead on Petrucci's whereabout, Borgia blamed Hiram for the rashness of his attack and its subsequent failure. To appease his fellow Assassin, Hiram agreed that the time had come to send a bird warning Ezio about their lack of success and while Borgia was doing so, spent the night talking with a beautiful servant girl.

The next day Hiram was awakened by Michelangelo who told him that Elena was in town and was waiting for him on the roof. However, instead of a sweet reunion between lovers, it turned badly as Borgia had told to Elena that while she was rushing from the countryside to console her man, he was sleeping with the servant. After Elena broke off with Hiram despite his claims that it was not true, the two young men began to shout at each other, with Hiram accusing Borgia of wanting to ruin his life out of jealousy.

Inevitably, the two bitter rivals began to brawl but after Hiram kicked Giovanni's head, his fellow apprentice fainted and became possessed by the Isu spirit of Consus. Through his host, the disembodied entity delivered a cryptic message to Stoddard, who at the time didn't understood that it was in fact addressed to his 21th century descendant, Charlotte de la Cruz, who was reliving his memories.

While Borgia remained unconscious on the floor and unaware of what just happened, a frightened Elena accused Hiram of somehow being responsible for the state of Borgia. Trying to evade Hiram's touch, Elena fell from the roof and died under the eyes of her distraught lover.

As a result of Elena's death, Hiram's personality was deeply altered and he became a bitter and ruthless man, earning the nickname "Bloody" Hiram. While he never saw Giovanni again after their fateful mission together, Hiram's hate for Giovanni didn't receded as he was deeming him responsible of everything.

One year later, a darker, disillusioned Hiram was no longer following the Creed, haunted by his lover's death and obsessed with finding back the Apple, hoping to use it to somehow contact Elena. In Greece, Hiram assaulted the Assassin hideout where the artifact was hidden and killed its guardians, but was ambushed by Borgia.

While dueling, Borgia tried to reason with Hiram and to convince his former rival to come back into the Brotherhood. Eventually, Giovanni bested the fallen Assassin and asked for Hiram's forgiveness but to no avail. Taking the Apple away, Borgia tried to reason one last time with Stoddard, giving his copy of Dante's Divine Comedy to his broken foe, before leaving.

At some point during his life, Stoddard fathered a son who became an ancestor of famous Master Assassin and Pieces of Eden hunter, Thomas Stoddard.

A hooded Hiram in issue #11 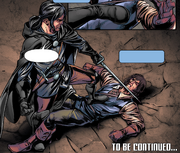 Retrieved from "https://assassinscreed.fandom.com/wiki/Hiram_Stoddard?oldid=848800"
Community content is available under CC-BY-SA unless otherwise noted.