The Highlander (harvested from: Duncan McGill) was an Animi Avatar used by the entertainment branch of Abstergo Industries, as part of their plan to influence the general public, via the console stage of the Animus technology. He became available once a system update had been installed, and his specialty weapon was a traditional basket-hilted sword, which reflected his Scottish origin.

The Highlander had several unique moves:

Walking up to his target, the Highlander pulls out his sword and strikes them in the forehead with its hilt. He then takes advantage of their defenselessness by piercing his victim's stomach with his weapon and withdrawing it quickly, before watching them crumple to the floor, dead.

Approaching his target from behind with his sword drawn, the Highlander swiftly slashes it diagonally across their spine. As they react, he spins the blade skillfully in his hand and cleanly stabs it up through their back, impaling his victim's heart from behind and causing them to collapse to the floor, where they die of blood loss as he sheathes away his weapon.

Charging towards his target, the Highlander pulls out his sword before roughly clotheslining them with his left arm, which sends them sprawling to the floor. Following this, he drives his sword down into his victim's stomach with his right hand, leaving behind a deep wound that they would die of blood loss shortly after.

Rushing over to his target from behind, the Highlander spins his sword around in the air, before forcefully chopping them in the waist with his weapon, getting it lodged in their flesh. In order to free his weapon, the Highlander slashes his victim through their body with a mighty swing, spinning them in the process. Afterwards, while his target lays dead on the ground, he stores his sword back at his belt.

The Highlander grabs his seated target's foot and drags them off the bench, until their head rests against it. Before his victim can do anything to defend themselves, he forcefully kicks them in the face, violently sending their head backwards and breaking his target's neck on the bench behind them.

Leaping onto his target from above, the Highlander unsheathes his sword in mid-air. When he lands, he forces them down to the floor and impales them in their heart with his weapon, before he stands and leaves his victim laying dead.

The Highlander could be customized in several ways:

Concept art of the Highlander, by Pierre Bertin 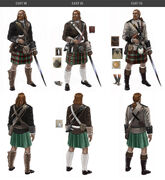