Arno: "This is why I joined the Brotherhood!"
Quemar: "Yes. Not because you shared our ideals, or felt called to the service. For revenge."
—Quemar berating Arno for his personal vendetta, 1793.[src]

Hervé Quemar was a Master Assassin and member of the Parisian Brotherhood's Assassin Council, as well as a lawyer. During the French Revolution, he kept a very low profile and defended people accused of treason by the National Assembly.[1]

Quemar: "Must we rehash this debate again?"
Mirabeau: "We must, and we will, Master Quemar. If you cannot see the advantage in being owed a favor by François de la Serre's daughter, I despair for our future."
—Quemar questioning the value of an Assassin-Templar truce, 1791.[src]

Little is known of Quemar's early life and how he came to be an Assassin. By 1789, he had earned a position on the Assassin Council, which directed the Brotherhood's activities in Paris. With the burgeoning French Revolution, the council endeavored to keep the peace and decided to form a truce with the Parisian Rite of the Templar Order through their Grand Master François de la Serre to achieve this.[2]

Although de la Serre was murdered shortly thereafter, the council continued to operate under the assumption that the truce was being honored. In 1791, Quemar encountered Arno Dorian, one of the Brotherhood's newer recruits, in the Café Théâtre's armor room and informed him of the history behind Thomas de Carneillon's robes, which were being kept in a vault there. However, said vault had not been opened for two centuries since the seal that opened it had been broken and become scattered across Paris; Arno subsequently decided to track down the fragments.[2]

That same year, Arno brought evidence that Templar Charles Gabriel Sivert was extorting money from nobles for an unknown purpose, leading Quemar and the others to realize the truce had long been broken. They then gave the young Assassin permission to track down de la Serre's killers, but were outraged when Arno's zeal in this matter caused him to pursue targets without the council's permission.[2]

Tensions worsened on the 2nd of April, when Arno brought his lover and Templar Élise de la Serre to the Assassin headquarters underneath the Sainte-Chapelle. Mirabeau saw in this an opportunity to renew the truce, but Quemar and the other council members opposed the idea. Later that day, Quemar was visited in the Assassin sanctuary by Arno, who informed him that Mirabeau had been murdered.[2]

Initially intent on summoning the rest of the council, Quemar agreed to give the young Assassin a day to find the killer. When informed that Mirabeau had been poisoned with aconite, he suggested Arno visit an apothecary in Le Marais, from whom Quemar himself occasionally procured aconite to treat his heart condition. Arno eventually discovered it was Pierre Bellec who had poisoned Mirabeau and, during a confrontation at Sainte-Chapelle, struck down his former mentor, leaving the council deprived of two of its members.[2]

Arno: "More fetch and carry work, I imagine?"
Quemar: "Two Master Assassins are dead. One by your own hand, in defense of a Templar. Count yourself lucky this is the extent of your punishment."
—Quemar and Arno following the death of Mirabeau and Bellec, 1792.[src]

In the aftermath of Mirabeau's death, Quemar and the others uncovered his correspondences with King Louis XVI. To prevent copies of these letters from falling into the hands of the Templars, the council sent Arno to the Tuileries Palace to find and destroy them. While he succeeded in this task, Arno continued to pursue François-Thomas Germain and his accomplices, which the council had expressly forbidden him from doing.[2]

After the execution of Louis XVI in 1793, the council confronted Arno about his actions, with Quemar claiming he had only joined the Brotherhood for revenge, not because he shared the Brotherhood's ideals. Sophie Trenet, who had inherited Mirabeau's position, then called for his expulsion, to which both Quemar and Guillaume Beylier agreed, causing Arno to be banished from the Parisian Brotherhood. Arno was later reinstated, after he reformed and demonstrated true fidelity to the Creed.[2] 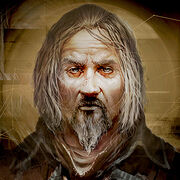 Quemar with his fellow council members