Herman Geier (died 2012) was an Abstergo doctor who went undercover in an Assassin cell under the supervision of Lucy Stillman in 2012.

He was present alongside Tom at the hideout that Lucy had taken Desmond Miles to after their escape from Abstergo Industries' facility in Rome; there, he helped monitor Desmond's sessions in the Animus, after Lucy, Tom, and Desmond were attacked by Clay Kaczmarek once their introduction turned sour.[1]

When Desmond learned that the Ankh was stored in a statue at the Villa Auditore in Monteriggioni from his ancestor Aquilus' memories, the team set off to retrieve it. However, while traveling in their van, the Assassins were attacked by Templars, who forced their vehicle from the mountain road they were on and shot their driver. After Lucy, Shaun Hastings, Rebecca Crane and Desmond fended off the attack, Geier hid beneath the overturned truck.[2]

Once the situation had been resolved, Geier suggested that Abstergo had planted a bug on Lucy or Desmond, saying that it could be the reason they were tracked. However, Lucy remarked that both her and Desmond had changed their clothes since the escape, invalidating the theory, and the group resumed their journey.[2]

After Desmond had relived more of Aquilus' memories in the Animus that was set up inside the van, he discovered the meaning behind the phrase "The eagles don't fear the vultures, but they have to start being cautious", which his father had told him while young, and what Weke—the servant of Aquilus' father Lucius—had mentioned with his dying breath. Driven to action, Desmond urgently requested for Shaun's gun, following which he shot Geier in the leg.[2]

To this, Lucy requested that Desmond explain himself, who then told her to use a phone he had taken from the body of one of their Templar attackers and dial the last known contact. At this point, Geier's phone began to ring, making his true allegiance known to the Assassins. Satisfied, Desmond killed Geier with a bullet to the head, before explaining to the group that "geier" was German for "vulture."[2] 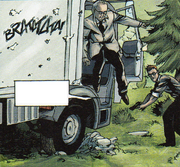 Geier hiding under the truck

Geier, moments before his death