"When I was flesh, I apprenticed with Hephaestus, the maker. The War of Unification raged. We created devastating Swords to end it, but then... killed. I created Shrouds, to heal."
―Consus, mentioning his master, Hephaestus.[src]-[m]

Hephaistos, alternatively Hephaestus, was an Isu metal forger and weaponsmith who lived during the War of Unification. He was also the teacher of Consus, another Isu.

During the Isu Era, Hephaistos was known as "the maker" among his people, having invented many Pieces of Eden and at one point trained Consus, who later used his teachings to develop his own Pieces of Eden, such as the healing devices known as the Shrouds.[1] During his time in Atlantis, Hephaistos also constructed a forge beneath Poseidon's palace and created numerous weapon blueprints which could be used with it.[2]

Likewise, he was the engineer responsible for the Ancient Forge on the island of Andros and the smith behind the the Spear of Leonidas, which could be upgraded at this forge. The Forge held the apparent mold for the spear, as well as the molds for a sword, a battleaxe, and a halberd. The Hammer of Hephaistos wielded by the Cyclops Arges was allegedly another one of his creations. [3]

Hephaistos, like many of the Isu, later came to be revered by humans as gods, most notably in the Greek and Roman pantheons as the god of smithing and fire, forgework, and volcanoes.

In Greek mythology, Hephaistos was said to have a limp, and when this was discovered by the goddess Hera, who was said to have been his mother, she threw him off Mount Olympos. Hephaistos landed in the sea near Lemnos, where sea deities rescued him.[4]

Hephaistos also helped the hero Herakles with at least one of his tasks, albeit indirectly, as he was the creator of the rattle which the goddess Athena gave to Herakles to scare the Stymphalian birds out of hiding.[5]

Hephaistos was also later credited as the acting midwife for Zeus when it had come the time for Athena to be born, cleaved Zeus' head open with a labrys to free the goddess.[6]

Many of Hephaistos' creations survived the end of the Isu's reign, becoming objects of divine origin among humanity. During the 5th century BCE, the islands of Thasos and Lemnos were known as the Hephaistos Islands, with the latter housing a notable temple dedicated to Hephaistos. The volcanic island north of Argolis was called the Foundry of Hephaistos.In addition, the polis Athens housed a temple dedicated to him. Some claimed that a cave hiding curious architecture in its depths in the northern parts of Malis held Hephaistos' workshop.[3]

Also during this time, Kassandra made her living as a mercenary. Due to her nature as a hybrid with high concentrations of Isu DNA, she had access to a range of powers within the Spear of Leonidas, one of which included the ability to temporarily imbue her weapons with the divine flames of Hephaistos' forge.[3]

In 2012, Desmond Miles' Assassin cell named their email communications network after the god.[7][8]

The mural depicting Hephaistos riding a donkey in Assassin's Creed: Odyssey is based on a vase painting from the 5th century BCE.

Hephaistos (right of center) amongst the Greek pantheon 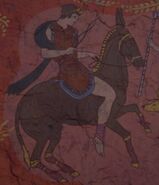 A 5th century BCE mural of Hephaistos, holding tongs and riding a donkey