"H. has it, so I assume the war will begin as soon as he can take over. We'll let him have his fun (Lord knows, that kind of purge will be good for Europe) and then end it with a bang, as planned. Out of the chaos of war a new order will arise!"
―Henry Ford in a letter to Thomas Edison.[src]

Henry Ford (1863 – 1947) was the American founder of the Ford Motor Company, a pioneer of modern assembly lines used in mass production,[1] one of the leaders of the Templar Order[2] and one of the Founders of Abstergo Industries.[3]

In 1891, Ford was employed as an engineer at the Edison Illuminating Company, and in 1896 he met Thomas Edison at a meeting of the company's executives. Edison was the man who authorized Ford's use of an Apple of Eden.[4]

In 1902, Ford and former bicycle racer Barney Oldfield developed a second model of the Ford 999, suited for racing. The Ford 999's wins in races secured Ford's future success. In 1909, Ford's second model of the Ford Model T was exhibited at the Alaska–Yukon–Pacific Exposition.[4] The following year, Ford and the other leaders of the Templar Order designed "the Plan".[1] On 1 December 1913, Ford installed the first assembly line system on the advice of William Klann at the Highland Park plant. The innovation sped up production time, reduced from 12 hours to only just 1 hour and 33 minutes. On 5 January 1918, Ford announced his company would pay its workers $5 per day, however, the supposed pay rise was actually a paycut: Ford used the Fourth Apple to convince his workers otherwise.[4]

On 22 May 1922, Ford began a seven-year hate campaign against Jewish Americans in a series of antisemitic pamphlets titled The International Jew, published by the Ford-owned, Dearborn Publishing Company and distributed through The Dearborn Independent newspaper.[4]

On 11 February 1929, Ford attended Edison's 82nd birthday celebration alongside fellow Templar Harvey Firestone. Following this, Ford was instructed by his Templar associates to send the Apple in his possession to Adolf Hitler in Europe, who would use it to start the Second World War. Ford, himself a noted antisemite, gladly did so, claiming "that kind of purge [would] be good for Europe".[4]

In 1937, Ford and his fellow leaders founded Abstergo Industries, which from that point on acted as a secret front for the Templars.[3]

In Ubisoft's 2014 video game Watch_Dogs, Henry Ford and his Templar affiliation are talked about during a phone conversation. 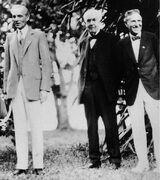 Ford with Edison and Firestone 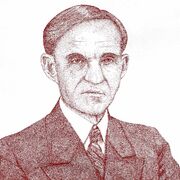 Henry Ford in Who's In Your Blood?