"Fashioned by the Helmschmied Armory in 1489, only a few sets were completed due to the weight of the metal."
―Animus description.[src]

The robes Ezio wore under the armor appeared similar to those of Altaïr Ibn-La'Ahad, though they possessed a leather texture, rather than cloth. On the waist, the Assassin insignia was flanked by rows of throwing knife sheaths.

Across the torso, the armor was made up of stylized metal plates. The upper right armguard extended higher than the shoulder, though the left one was set lower to make room for a cape. The matching bracers of the armor were worn in conjunction with leather gloves on each hand.

Concept art of the Helmschmied Armor 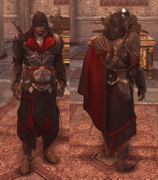 Ezio wearing the Helmschmied Armor during a Cristina memory

Girolamo da Lucca's appearance
Add a photo to this gallery

Retrieved from "https://assassinscreed.fandom.com/wiki/Helmschmied_Drachen_Armor?oldid=861496"
Community content is available under CC-BY-SA unless otherwise noted.