"Despite her brightly-colored costume and somewhat silly headgear, the Hellequin clearly prefers to act in dramas. Especially the bloody ones. When using her two daggers, she's always sure to leave her audience with a grin from ear to ear."
―Ubisoft description. 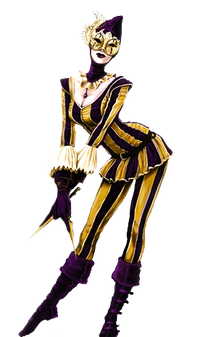 The Hellequin (real name: Caha) was an Animi Avatar, used by Abstergo Industries to train the recruits in their Animi Training Program. She wielded a pair of barbed golden daggers as her weapons, and her attire consisted of a striped gold and purple jester costume with an ornate golden mask.

The Hellequin had several unique moves:

Walking casually up to her target, the Hellequin quickly grabs one of her daggers and forcefully stabs it down into their left foot. As her victim can no longer step ahead, she takes her other dagger from the ring on her belt and stabs them under the chin, impaling the brain, before ripping her barbed weapon out. With her target freshly dispatched, the Hellequin bends down to retrieve her other dagger and hooks the two of them back onto her belt, before leaving the scene.

Approaching her target from behind, the Hellequin gently taps them on the shoulder, before twirling around them and out of their sight as they search for the source of the touch. From there, the Hellequin quickly stabs her victim once in the lower back with one of her daggers, puncturing their kidney and paralyzing them with shock. As her target drops to their knees, the Hellequin hooks her dagger back at her belt and walks away casually.

Rushing at her target from the front, the Hellequin vaults over her target with athletic prowess, withdrawing her daggers as she leaps, before stabbing both of them down into the crevices between their neck and shoulder blades. Landing behind them with the momentum, the Hellequin nudges her dying victim with her bottom, letting gravity pull their limp body to the floor. Dusting her skirt afterwards, the Hellequin sheathes her weapons and carries on as usual.

Hastily sneaking up to her target from the rear, the Hellequin takes a running start and pushes their shoulder to leap over them, kicking her legs up into the air as she twirls over them. Once she lands, she takes out one of her two daggers and stabs her victim in the throat, before yanking the barbed dagger out and replacing it at her belt.

Lifting her target's chin up to get their attention and make them sit straight, the Hellequin jumps up and wraps one of her legs around their neck and clamps her other leg behind their head. Using the momentum of her jump, the Hellequin tilts herself, snapping her victim's neck while she lands on her feet, in a crouched position.

Jumping down from a rooftop onto her unaware target, the Hellequin lands over them in a straddled position, pinning them to the ground. From there, she takes out one of her daggers and stabs her target in the side of their neck, puncturing their windpipe, before standing up and sheathing her weapon at her belt.

The Hellequin could be customized in different ways:

Development art for the Hellequin.

A picture of the Hellequin's fan exclusive reveal.
Add a photo to this gallery

Retrieved from "https://assassinscreed.fandom.com/wiki/Hellequin?oldid=421767"
Community content is available under CC-BY-SA unless otherwise noted.