"Those who cling to life, die; those who defy death, live."
―Hattori Hanzō.[src]

Hattori Hanzō (c. 1542 – 23 December 1596) was a vassal for Tokugawa Ieyasu, the last of the three unifiers of Feudal Japan. A famous samurai and ninja, Hanzō was also a member of the Japanese Brotherhood of Assassins.

Hattori Hanzō was a vassal of the daimyo Tokugawa Ieyasu, and a ninja trained in Iga. Aside from the ninja arts, Hanzō was also trained as a samurai, and his skill with the yari was legendary.

When the Assassins caught wind of the Templars' expansion into Japan, they sought to recruit new allies. Ninja such as Hattori Hanzō were inducted into the Brotherhood, from whom the Assassins in turn learned new skills and techniques.

Fight for the Sword

The Assassins eventually formed an alliance with Ieyasu, and together they formed a plan to retrieve the Sword of Eden and aid Ieyasu in conquering the land. Hanzō worked closely with Chaya Shirōjirō Kiyonobu, who often acted as a contact on Ieyasu's behalf.

In 1571, on Ieyasu's orders, Hanzō assassinated the daimyo Mōri Motonari, a strong opponent of Ieyasu's ally Oda Nobunaga, in order to allow Nobunaga to conquer the Mōri clan's lands. Two years later, after the Tokugawa and Oda forces fought the Takeda clan at the Battle of Mikatagahara, Hanzō and Ieyasu's vassal Honda Tadakatsu entered Takeda Shingen's camp. Shingen was killed during the ordeal, and Hanzō retrieved the Sword of Eden from him.

Five years later, on 19 April 1578, Hanzō assassinated another rival daimyo, the Templar Uesugi Kenshin. In June 1582, word reached the Tokugawa that Akechi Mitsuhide planned to betray his lord Oda Nobunaga, who had been in possession of the Sword of Eden. Hanzō stayed with Tokugawa Ieyasu to ensure his lord's safety, and tasked another Assassin, the monk Yamauchi Taka, to travel to Honnō-ji and retrieve the Sword of Eden from Nobunaga. Taka killed Nobunaga during Mitsuhide's attack, and brought the Sword to the Chinese Assassin Liu Yan, who took it with her to China.

"I bemoan the fact that our relation has come to an end, just when it was becoming profitable for me. Enjoy what little remains of your life, ninja."
―Kiyonobu to Hanzō, 1590s.[src]

After Nobunaga's death, his vassal Toyotomi Hideyoshi became his master's successor. Ieyasu was later defeated by Hideyoshi and pledged loyalty to the Toyotomi. Chaya Shirojiro Kiyonobu tried to set up a trade route to bring supplies to Ieyasu, a task which Hanzō aided by eliminating one of the patrolling Toyotomi kashira.

At some point during the 1590s, Hanzō was tasked with the assassination of the Templar Mochizuki Chiyome, a female ninja who formerly worked for Takeda Shingen. Based on intel retrieved from Chaya Shirojiro Kiyonobu, Hanzō tracked her down to her residence in Shinano, where he assassinated her.

He was ultimately killed by his rival Fūma Kotarō on 23 December 1596, in the Tokugawa capital of Edo.

Hanzō in his ninja attire 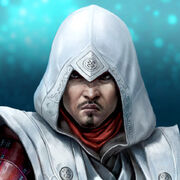 Hanzō close-up
Add a photo to this gallery

Retrieved from "https://assassinscreed.fandom.com/wiki/Hattori_Hanz%C5%8D?oldid=799260"
Community content is available under CC-BY-SA unless otherwise noted.