Hasdin Al-Bellal was an Egyptian who participated in the theft of the Scepter of Aset with the Templars in 1340. Hasdin was the man who inadvertently led the Assassin Numa Al'Khamsin to the rich merchant Bachir Al-Djallil, which resulted in the assassination of Bachir.

In 1340, Hasdin was present in a bathhouse in Cairo where he eavesdropped a conversation regarding the Scepter of Aset. Hasdin overheard that the Scepter had been stolen, however the stolen Scepter was assumed to be a fake copy to make the thieves believe they stole the real Scepter. Unknown to Hasdin, the conversation was made up by the Assassin Numa Al'Khamsin to gather more information about the Scepter.

After hearing enough, Hasdin immediately went to see Bachir Al-Djallil, an Egyptian merchant who was also involved in the theft of the Scepter of Aset. On his way to Bachir, Hasdin was being tailed by Numa Al'Khamsin, which resulted in the Assassin infiltrating Bachir's residence and eventually executing the merchant. 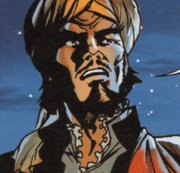 A close up of Hasdin 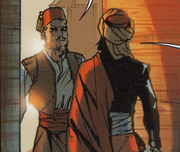