A harpy is a winged creature in the Greco-Roman mythologies, especially in works attributed to Homer.

According to one story, two members of the Argonauts visited the island of Kephallonia to pray at a local temenos dedicated to the god Zeus for strength to battle the harpies.[1]

During the Seven Years' War, the Templar Shay Cormac obtained blueprints for and crafted a figurehead called "harpy skull" for his ship Morrigan. The figurehead was considered to be a standard symbol of elite warships.[2]

Despite similar descriptions, the harpies and the sirens of Greek mythology are two different, distinct species of creatures. 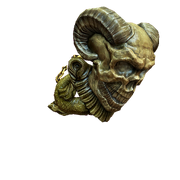